Creativity sits at the very heart of modern craft beer yet even when brewers push boundaries they’re drawing upon millennia of traditions and knowledge.

Shapeshifter are the most modern of craft breweries, with an approach that shows just how exciting and forward-thinking those traditions can be. Their name stems from the fact that, at its core, beer is simply built upon four ingredients but, just like a creature from mythology, something that might seem straightforward at first can turn into something with a wealth of complexity.

In the right hands, those four ingredients – hops, malt, water and yeast – can be transformed into truly delicious and rewarding drinks; like a werewolf that changes under the light of a full moon, beer can be an endlessly transformative experience, for both brewer and drinker alike.

When the Adelaide brewery launched in 2019, it’s safe to say the city’s craft beer scene changed with it too. At first, however, that change came via a question: just who was behind these eye-catching cans that more often than not tended to be filled with hazy beer? The answer was James McCall and Kevin Mulcahy, who met in 2016 while studying at South Australia’s long-running TAFE microbrewing course.

James’ background in graphic design may have ensured Shapeshifter’s cans stood out from the crowd, but it was his role as head brewer that ensured the liquid inside was just as exciting. Kevin’s career came in handy too, including years working in radio, while also managing and running a variety of small businesses.

By and large, since making their debut, the brewery’s focus has been trained upon craft beer’s more experimental realms, where new hops, brewing techniques and ideas drive Shapeshifter’s releases. It’s unsurprising, then, that after the pair’s beers began appearing across Adelaide and they became fixtures at beer festivals and events, their fast-growing faithful started to ask, with something of an air of desperation: “When will you have a brewery of your own?”

The question was answered in the second half of 2021 when they opened the doors to their production brewer and taproom in the western suburb of Findon. James and Kevin might have picked the warehouse space because they knew they could turn it into a brewery, but what wasn’t as certain was whether the community would embrace it.

Fortunately, the folks of Adelaide’s west soon came out in droves, as too did those travelling from further afield to enjoy their sought-after beers while looking over the stainless within which they were brewed.

However, appealing to the wider community was always part of Shapeshifter’s vision: as such, the venue is as family-friendly as it is beer-friendly, with pinball and arcade machines, dedicated space for kids, and a whole lot of dogs there on any given afternoon. Live music, comedy shows and regular community nights that raise money to support important causes all helped the brewery become ingrained in Findon soon after the doors opened. Meanwhile, a rotating roster of food trucks ensures each night brings fresh food to pair with the mythical beers.

Of course, if you’re reading this site, while games and food trucks are all well and good, it’s likely their beers will have you most excited. And as you walk in and are greeted by a brightly-lit sign asking Are You Thirsty?, you’ll know you’ve come to the right place, one where a dozen taps pour the brewery’s creations from a bar on the right, with the 12-hectolitre brewery sitting in the back corner.

Since their brewery started firing on all cylinders, Shapeshifter beers have found their way into good beer spots not only across Adelaide, but also along the east coast. And, while much early praise was heaped upon their hazies, you’ll never want for choice whether at the taproom or when spotting their beers further afield. In particular, their dialled-in and finely-delivered lagers have impressed The Crafty Pint’s team.

As for limited releases, they flow from the brewery at an impressive pace; many are modern IPAs, yet there’s no shortage loaded with fruit, coffee or other adjuncts, or indeed those that have spent time in barrels.

At which point, it’s worth acknowledging beer isn’t always just those four ingredients. But when the results are as tasty as this, why would you want to stop brewers from twisting it into new shapes?

Shapeshifter have been building a reputation for their hazy beers, big stouts and willingness to embrace new trends since launching in 2019. Today, they open the doors to their new home, featuring a 12hL brewhouse and a dozen taps.

Brewing isn't a career many chose while in school and, while Carla Naismith is no different, she soon discovered a passion for the industry she's never been able to shake. We invited Shapeshifter's senior brewer to join us for a Brew & A. Shapeshifter Brewing made beers with no home for some years but when they put down roots in Findon, they were eager to pay tribute to their neighbourhood and community. Findon’s Finest is that celebration, with the helles a house lager that was first brewed just for locals at their taproom before spreading its wings further afield. But while the beer might have been brewed for Adelaide's west, it could just as easily be straight out of Germany, with the easy-drinking, clean and balanced lager a… Read more
Pale Yellow Brewers don’t often like to play favourites with their own beers but Nordic Hazy IPA certainly holds an important place in James McCall’s heart. The kveik-fermented beer was one of Shapeshifter Brewing’s early releases and it helped put the Adelaide brewery on the map as merchants of juice and haze. The beer uses three separate strains of the storied Norwegian yeast that’s found favour with modern brewers looking for even more juice notes in their beer and here it seems to bring a fragrant… Read more
Golden Yellow It’s hard to have a bad time when wearing a Hawaiian shirt and Shapeshifter Brewing think that drinking a Party Shirt is the start of a good time too. The session hazy features El Dorado, Talus, BRU1 and the result is a beer that’s as tropical as drinking a piña colada on a beach you construct a phone line out of a series of coconuts that's good enough to rival Australia's rural telecommunications infrastructure. Largely, those fresh fruits come in the shape of a pineapple, coconut and stone… Read more
Pale Yellow Dark beers tend to be best associated with colder weather but plenty strike that perfect balance that ensure they’re ready for any time of year. Make Your Move is such a beer, with Shapeshifter’s Czech dark lager a blending mix of rich undertones and lighter notes in such a way that soon after it was released (AKA immediately) it became a house favourite at the brewery's Findon taproom. It also quickly found favour with some of the nation's best beer palates, with the beer taking out a gold… Read more
Black As a general rule, West Coasts have become leaner and leaner but (unlike many of their beers), Shapeshifter’s core range IPA isn’t about looking at what's new. No, Golden Ratio is about looking towards the past, with the throwback an orange IPA with plenty of malt notes to match the hops. When it comes to hops, those are Warrior, Cascade, Sequoia and Germany’s less-often-seen Herkules. That mix provides aromas of ripe orange and pine that runs down the back of the palate before a bit of caramel… Read more
Golden Yellow 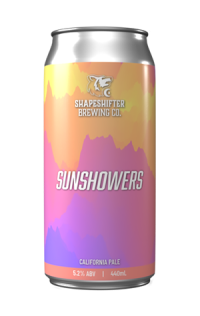 California pales might be heavily hopped but unlike their East Coast counterparts, they bring with them a lighter and breezier side that - and this may just be personal preference - makes them a wonderful beer for a long and hot afternoon. Shapeshifter’s Sunshowers is such a beer, with the Cali pale balancing plenty of hops with a lean, crisp and lighter touch. Those hops come in the all-American lineup of Citra, Talus, Cashmere and Sequoia which almost guarantee you'll be greeted by plenty of… Read more
Golden Yellow Shapeshifter Brewing might have built something of a reputation for hoppy and hazy beers but the Adelaide brewer have a deep love for lager too. New World Pilsner combines that affinity for both hops and lagers by taking a clean, balanced and lean base and topping it with New Zealand’s Pacifica and Motueka. As you pour the beer, you might be struck by how golden and clear the beer is but it's just as likely you'll immediately be engrossed in its wide mix of fresh fruit aromas. Largely, they come… Read more
Pale Yellow