The name makes brewer Andrew Swift's inspiration pretty clear: kick|snare brewing. But, if that wasn't enough, the decals and tap handles he's been creating for his beers to date hammer the message home. They come fashioned from cassettes or in the form of Shure microphones, making it more than apparent that Swifty's passions encompass both music and beer.

He launched kick|snare last year, brewing his first beers at Morrison Brewery before embarking on a mission to build his own just a couple of hundred metres away. That is now complete – or at least complete enough to be brewing beer. He's reworked various pieces of gear picked up from farms and the like around North East Tasmania and currently has two tanks filled with beer. The brewery shares a factory space with a small cheese maker, a yoghurt making company and, soon, a craft maltings being put together in a similarly homespun manner right next to where kick|snare's kegs and packaged beers are slowly building.

Swifty's beers first made a splash on the local scene when he released the Stompbox IPA; staff at the city's craft beer hub Saint John tell us the beer was the talk of the town for some time. Other releases include Ella Brown, a brown ale featuring Tassie hops so called because it sounds like the name of a Motown singer. Then there's The 58, named after the classic Shure microphone, the SM58, which he tells us was the go to for the likes of Jimmy Barnes and John Farnham, in part as it can take one hell of a beating. Swifty told Shure about the beer and they sent him a box of microphones that now form his tap handles.

He told us that he's considered playing music to his beer while in the fermenters and has weighed up whether it's possible to record music not to tape or digitally but to beer: setting up some sort of gear that would somehow translate what was being played into beer.

While he's still juggling a pretty much full time teaching job, three young kids and playing drums in a jazz band, now that the brewery is operational there should be more of his beers appearing around Tasmania soon, with the bottles leaving the brewery unmarked, their contents indicated by tags slung around their necks. As with everything kick|snare, they're made by the brewer – there were leftovers on the floor from a day making stencils for kegs and packaging when we visited – who will be taking his bar around a few festivals over the coming weekend. So we thought that made it the perfect time to ask him to feature in one of our Who Brews...? features. 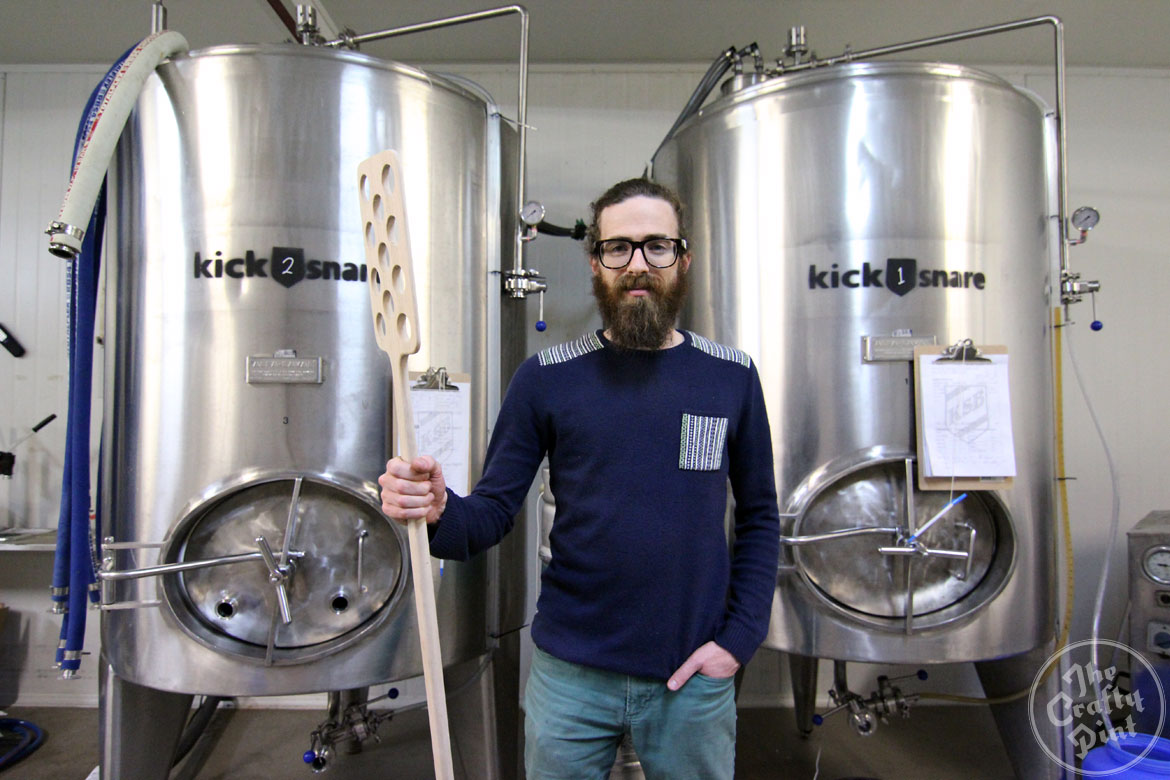 Who are you?
Andrew Swift – owner / brewer

Where do you brew?
In our brewhouse in Invermay, Tasmania.

Why do you brew?
I love sharing my beer with people. I also enjoy the science and challenge of the process - and of course the aroma and taste.

Was there a beer or a moment that set you on the path to becoming a brewer?
Matilda Bay’s Fat Yak made a real impression several years ago, along with Little Creatures Pale Ale. Then I discovered Unibroue [the Canadian brewery that makes legendary beers such as Fin du Monde].

The pivotal moment was made late one night standing in a mate’s kitchen, having enjoyed several homebrews made from the malt he’d produced there in his kitchen. We both decided the beer was so malty and fresh the public should have the chance to experience it.

To date, the brewhouse is complete with the malthouse coming soon.

What beers have you released to date?
Stompbox IPA, Ella Brown, The Fifty-Eight Aus Pale. About to release 440 Hz Amber Ale (single batch).

Where can people find your beers?
Cellar door coming soon. Plenty of festivals coming up (focusing on the small ones this year) and all good craft bars.

What’s the inspiration behind the brewery name?
I’m a drummer/sound guy with a keen interest in original music. I believe the bar should be home to good music AND good beer and that original music demands original beer.

“Kick” (aka the bass drum) is always channel one on the mixer at a rock show, followed by “snare” on channel two.

What beers are in your fridge right now?
None. Unfortunately, beer in my fridge is a rare luxury. With three layers of tax payable on beer in this country it’s prohibitive. A six-pack of craft in Australia typically retails at $25 to $30: in the US the same is under $10.

Which beers are found in your fridge most frequently?
My experimental brews: most recently a smokey sour amber.

If I could fill my fridge with other folks’ beer, it’d likely be Rogue, Unibroue and Moon Dog.

Where do you hope your brewery will be ten years from now?
Synonymous with the local music scene – actively supporting artists and events which promote local talent while having a reputation for producing truly excellent, distinctive beer.

Thanks, Swifty. You will find him pouring beers at the Clarendon House Spring Fling on September 20, at the Tasmanian Microbrew Festival in Hobart and then at Grindelfest on October 9 and 10.