A while back, The Monk's head brewer Craig Eulenstein told The Crafty Pint that one of the reasons he'd applied for the job at the Freo brewpub was because he wanted to try to win the title of Australia's Champion Brewer. It was a bold ambition but, after snaffling some gold medals and trophies in his first 18 months at the brewery, he's achieved his goal, with The Monk taking out Champion Small Australian Craft Brewery at the second Craft Beer Awards in Sydney.

He joined Two Birds, who retained the Champion Large Craft Brewery title they shared with 4 Pines in 2014, and Modus Operandi, who followed up last year's eye-catching swag of trophies with three more, including Champion Medium Craft Brewery, having shifted up a size category.

As for the Champion Craft Beer, it went to Feral Brewing's Watermelon Warhead, the Berliner Weisse first brewed for the Great Australasian Beer SpecTAPular (GABS) in 2012. With the popularity of sour beers continuing to rise, it seems fitting that one of the first to gain broad acceptance (well, broad within the context of sour beers in Australia) should be recognised.

The second awards run by the Craft Beer Industry Association attracted 468 entries, draught and packaged, from 91 Australian breweries. They were judged by a panel of experts from Australia and overseas earlier in the week, with the best of the best announced at an awards ceremony at COMMUNE Makers. 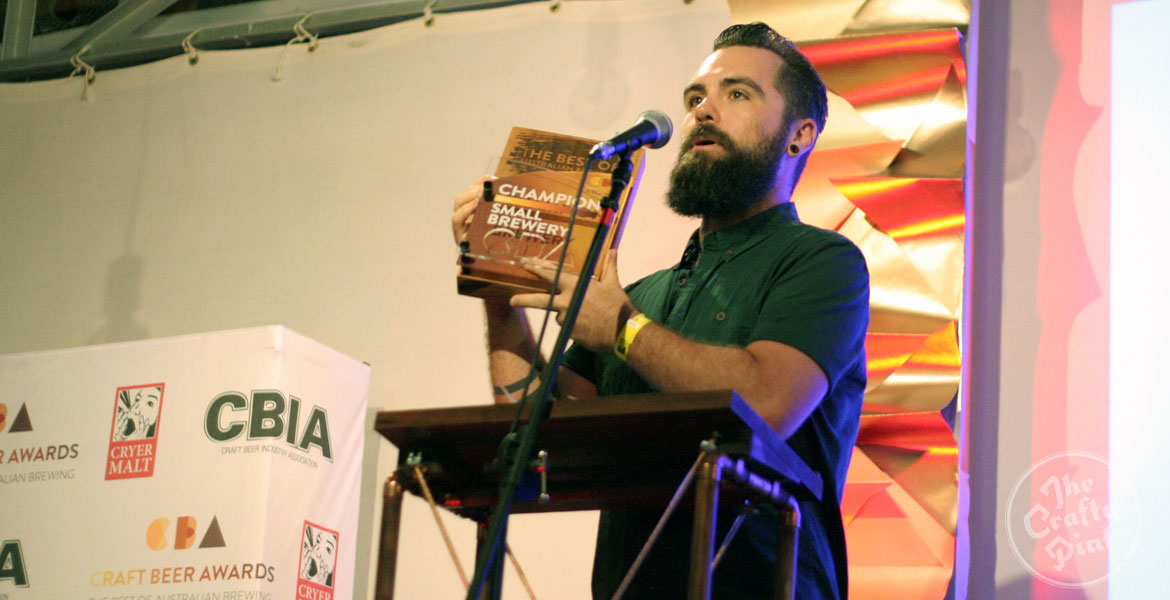 For Craig (pictured accepting his trophy), who replaced all of the existing beers on the lineup at The Monk – many of which were past trophy winners – with an entirely new range, not to mention starting a barrel program, it's the ultimate validation.

“It wasn't so much a case of wiping the slate clean," he said, "because the previous beers were really, really awesome. It was more about making the beers a bit more relevant, changing the names and creating something the next generations of brewers can build on.”

It was also a good night for the women of the industry. Not only did Two Birds back up their previous triumph but the beer they brewed earlier this year with the Pink Boots Society, the Neneh Cherry Saison, was named Champion French / Belgian Ale.

A visibly buoyant head brewer Jayne Lewis (pictured with one of her trophies) spoke of Two Birds' haul of three gold medals – for the saison plus their two original ales, golden and sunset – as being an "incredible honour". 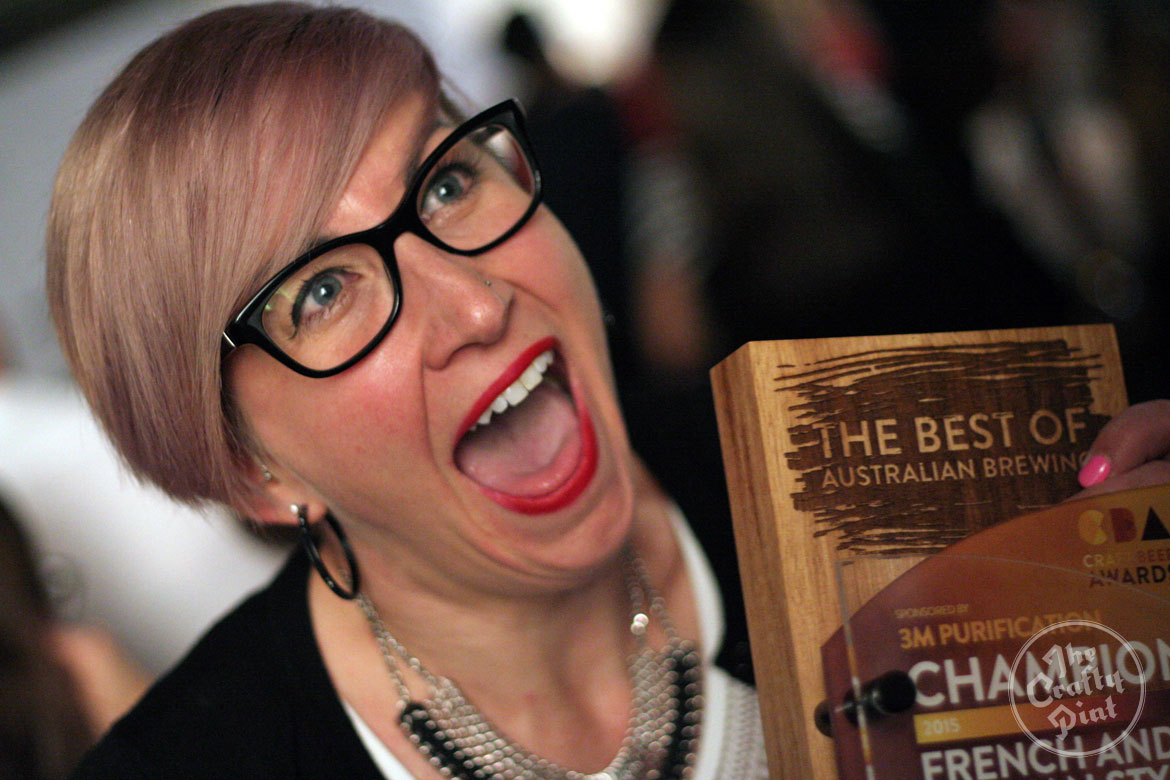 As for Modus Operandi, if anyone was wondering whether last year's triumph was a fluke, coming so soon after they'd opened their doors, the answer was a resounding: "NO!"

As well as the Champion Medium Brewery trophy they took out Champion IPA again for their Zoo Feeder IPA and Champion Pale Ale for Simmy Minion.

Brewery owner Grant Wearin (pictured onstage below with his brewers) said: “We’re a small business – apparently medium now – and we work really, really hard every day so this means an awful lot to us.

"The pale ale in particular is such a broad category so, to me, that’s like winning the big one. I’m just really proud and humbled.”

Reining AIBA Champion Large Brewery 4 Pines relinquished its Champion Large Craft Brewery title but still went home with a trophy for its American Amber, along with seven silver medals, while Brisbane's Newstead Brewing – in the news this week due to plans to open a production facility close to XXXX – won Champion Specialty Beer for its 3 Quarter Time Session Ale.

Proving that it can pay to carry out the odd spot of refurbishment once in a while, Little Creatures' revamped Pilsner took out Champion Light Lager, while one of their beers was involved in another trophy on the night. Following Willie Simpson as recipient of the CBIA Services to Australian Craft Beer trophy was Roger Bussell – one of the two Rogers after whom Creatures named their Rogers Ale.

Congratulations to all the winners and thanks to Nick O for his sterling work rounding up winners for their reaction on the night. 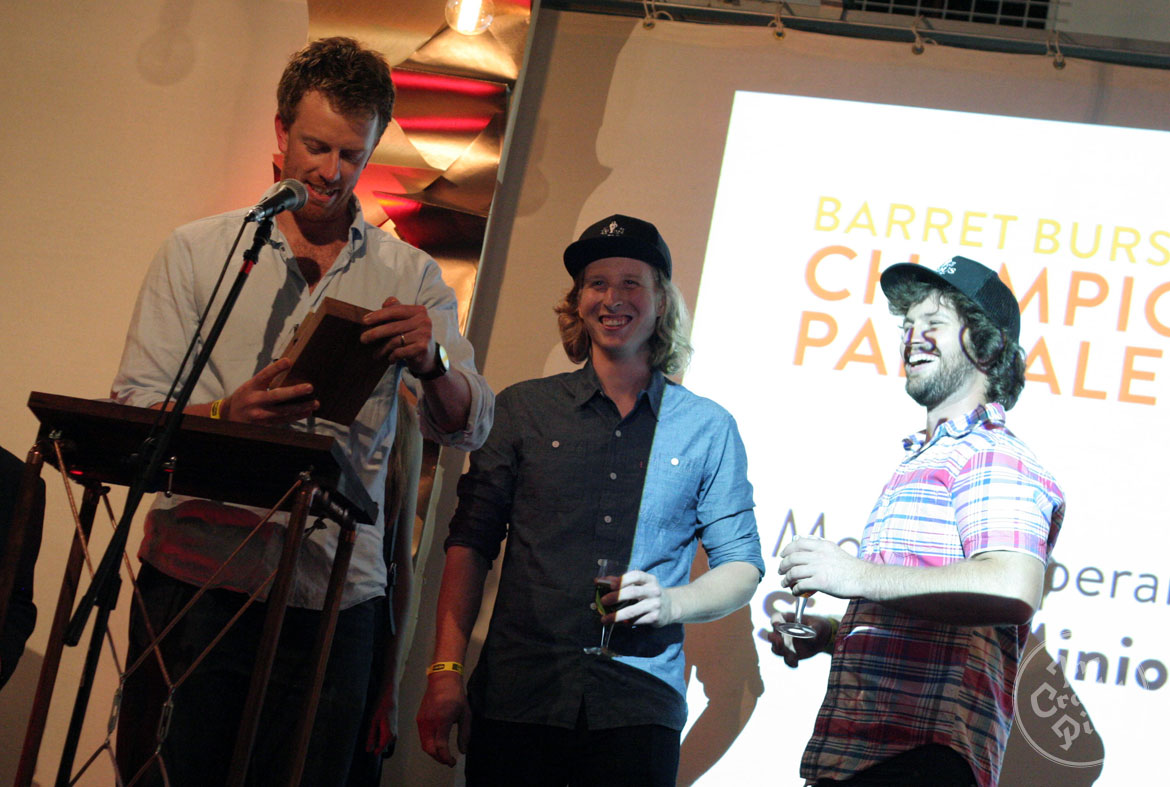