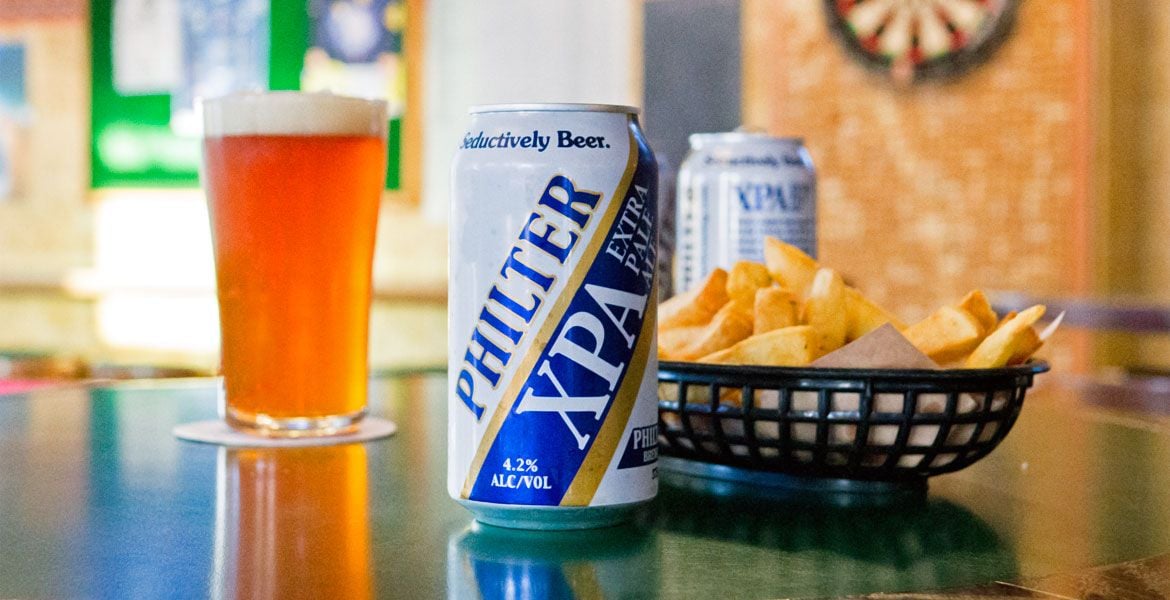 It’s no easy feat to brew Australia’s Champion Pale Ale. Within the craft beer sector, it’s the country’s most consumed beer style and one that tends to be the biggest seller for every small brewery that releases one.

This year’s Craft Beer Awards received a huge 204 entries in the category, more than any other style and not far off one in every three beers entered. Yet there could be only one winner. And, impressively, the winner came from a brewing company that had only been in existence for four and a half months – and doesn’t yet have a system of its own on which to brew.

The beer that took out the trophy is the XPA from Philter Brewing, which launched in Sydney in March this year. It’s co-owned by brewer Samara Füss, along with friends and fellow Inner Westies Michael Neil and Stefan Constantoulas, both of whom have experience in large scale sales and marketing.

“We weren’t even going to enter [the awards],” says Sam. “We were just going to use it as a benchmark, get some feedback and notes from the judges.”

But, as the first of the awards was announced at the Adelaide Oval in late July, it was a visibly and happily shell-shocked Sam who was called to the stage with Michael; Philter XPA had come out on top – a unanimous decision by all seven judges.

Although winning awards isn’t a foreign experience for Sam, they’ve always been won as part of a larger brewing team. This was the first time she’d claimed a major award for something she could claim to be hers – and it’s been a long time coming.

“I started brewing 17 years ago at Little Creatures in WA,” she says. “I had first worked on the bar there, but spent my spare time hanging out in the brewery with the guys and helping out on my days off.

“One day, one of the boys burnt his foot quite severely and had to take eight weeks off. There were only two brewers there at that stage and they didn’t have time to train anyone up or get anyone in. So, they called me up and asked me to help out.

“I had plenty of hands-on skills having grown up in the bush and on the farm and everything, so knew how to pull stuff apart and put it back together again – whether that was pumps, engines, all sorts… so I had that practical kind of thinking process.”

Making her mark on the industry almost right away, she then went on to run breweries in Melbourne and Sydney, including the Schwartz Brewery (which has since evolved into the Lovedale and Sydney Breweries), True South in Blackrock and Old Salt, before starting her most recent gig at Young Henrys in 2014.

It was only when the people who would become her two business partners began discussing the idea of starting their own company that Sam realised she could be the brewer to help them complete the story, one that took the name Philter after the medieval elixir said to act as love potion and aphrodisiac. But, without a brewery of its own, Sam had to find a place to develop the XPA’s recipe, which led her to Tasmania.

“I have a mate down there who has a 300 litre system that’s an exact replica of a bigger brewery,” says Sam, “so it was easy for me to scale up later.

“I went down and brewed a couple of batches, which was really good to do because XPA and session beer wasn’t really a style I’d brewed before. I had the concept, but wanted to make sure I nailed it. So many times a brewery hits the market and, within their first 12 months, you see it evolve drastically. I wanted to hit the ground running."

Alternating between brew days and fishing days down at the family property, the concept for the XPA – a style brought to prominence most widely by Gold Coast brewery Balter – grew. Along the way, any batches not quite to spec were either poured down the drain – an advantage of the small brew size – or “given to my mate in Hobart who owns a pub, who’d put it on and brand it as something else!” she says.

In the end, that “something” was a beer with low bitterness but high in flavour and aroma, made with a mix of Aussie and American hops – the sort of beer winning over drinkers more than any other today, done well.

Soon after came the second beer in the range, the Red: a little higher in bitterness, complemented with bready crystal malt characteristics and, as Sam explains, with “a hint of berry right near the end” adding that "despite the brewery's name, both beers are, in fact, unfiltered."

They are produced at Hope Estate in the Hunter Valley, which Sam visits on brewing and packaging days, making regular phone calls in between. While she talks of the brewing itself as an art – Sam talks of her strict guidelines that require testing, measurement and yeast cropping to be performed at particular times each day – it is the design of Philter’s packaging that is the true art form here.

“We get mixed emotions on it,” Sam admits. “It’s been described as a dodgy 1980s Dad NASCAR t-shirt design, but the best thing about it is people are talking about it. It gets a lot of banter and conversation, which is great.”

It’s a look that saw Sam called to the stage a second time at July’s beer awards to receive a special, unofficial trophy (well, a bottle of beer) that was introduced by beer educator, judge and writer Pete Mitcham with complimentary terms such as “bogan”. All beers in the Philter core range will feature the same retro design, with only the main colour on the can changing. They're intended to be sessionable and easy-drinking too; only when a suitable brewery location is found will any wilder ideas begin to make an appearance.

“I love cooking and doing different funky stuff, beers that are a bit left of centre,” says Sam. “I’ve made beers with people like Kylie Kwong and Josh Pyke, using ingredients including truffle, or chocolate, or quandongs and Lemon Aspen berry. Really what we’re doing is cooking a batch of beer – extracting flavours and getting a real different insight into how to get the best out of the ingredient your using – that’s outside the realm of malt, hops and yeast.”

As for a future brewery, Sam is adamant it will be in the busy brewing hub that is the Inner West.

“I don’t want to have to drive home from work!” she jokes. “But, seriously, the thing is for us, this is our neighbourhood. This is where [Mick and Stef’s] kids go to school, the pubs here are my locals.

“A lot of people starting breweries may not live here, but think to come here because this is where it’s all happening. Whereas the feeling for us is: this is our home, this is our community.

“We don’t want to just be a beer business. We’re in the business of making beer. We’re out there to make a good beer, be proud of what we produce, be proud of our actions and how we’re perceived.

“To win that award gives us legitimacy, gives us faith in what we’re doing and that we’re heading in the right direction.”

You can keep up to date with all things Philter here and check out the article we wrote on the XPA style and its different interpretations earlier in the year here.