Our Aussie Export series usually focuses on Australians who run or work for breweries overseas. But there are many more facets to the global beer community.

For one, there's the thriving beer media and, even within that field, there's much diversity and variety to be found. Outside more traditional platforms, podcasts, social media and YouTube all play an increasingly important role and it's here you'll find Craig “Cee” Thorn.

Having moved to Canada to pursue a career in hip hop with his brother, Craig developed a strong interest in craft beer soon after landing and, over time, turned that love into a blog. Eventually, that blog transformed into Craig’s most recognisable role as host of the Beer and Other Shhh (BAOS) Podcast and YouTube channel with his mate Scott Cole.

On top of that, he also writes for beer website Brew Studs and runs High Season Co with his partner Tiffany Alexis; it's a creative marketing and social media business that has some craft breweries among its clients.

We caught up with Craig on his most recent trip to Melbourne to find out more.

How did you end up in Montreal?

I made music so me, my brother and some friends wanted to head overseas to chase that. We had a distribution deal with a small label in Miami and all our traction was coming from the States through these American blogs.

We moved there in 2010 and, at that time, I knew nothing at beer; I thought I was fancy because I drank macro lagers from Europe and I didn’t know anyone who was drinking craft beer at all.

What are you doing in beer in Canada?

I really got into drinking craft beer when I moved overseas and talking and writing about beer became like a side project to making music.

Now it probably takes up more time than making music, but I think what we’re doing is a bit unusual. There aren’t that many people involved in craft beer doing a podcast, YouTube, on social media or writing.

How would you describe your podcast to those that haven’t heard it?

BAOS is me and my mate Scott going around, drinking good beer, having a good time and chatting to brewers.

When we started it, I was looking for a beer podcast I wanted to listen to, but all I could find was these middle-aged dudes talking in low tones about pale ales and malt profiles. I found that boring and couldn’t relate to anything like that.

We like to think we’re a bit more aimed at a younger crowd, of people from their mid-20s to mid-30s who are after something fun to listen to. We want to attract new people to beer too, so you need balance. We like to think people can listen in and geek out, while also draw people into the beer world and hope people won’t be scared away by all the technical info.

Is there much awareness of Australia’s beer scene in Canada?

There’s no clue, but, to be fair, most of the breweries don’t know much about what’s going on outside their city or province. A lot of the time, everything’s really province based and local and that’s a liquor license thing; in Quebec, it’s impossible to get craft beer from anywhere else.

Canada’s got really confusing, and often restrictive, licensing that’s a throwback to Prohibition in the country.

How are you finding the Australian beer scene now you’ve come back?

It’s an exciting time for beer in Australia – it seems to be expanding exponentially. Last time I was back here I didn’t really know anything, and I wasn’t here for long, so I missed stuff. But this time I had time to prepare and know where to go, I’ve been to some great bottleshops, bars and breweries.

One of the other things that really excited me was going to bottleshops like Slowbeer, Beermash and Carwyn Cellars where they are bars too. Turning bottleshops into such an experience is incredible; we don’t really have that where I live and I think that really shows how the scene is really popping here.

The Mill Brewery, Stomping Ground, Mr Banks are all breweries I’ve really enjoyed while in Melbourne and what’s exciting is they all haven’t really even been around that long. There’s so much choice here that I don’t even know what to do, except spend more time in Australia next time I come home.

Recently, there' been some discussion at how “Instagram culture” or hype can have a negative effect on beer. As someone with a focus on social media and beer, what are your thoughts?

I have met so many people through Instagram and think it’s a great way to connect with likeminded beer drinkers. I think trading beer is fine when it’s between friends, because it’s fun to talk about beer with them and work out what kind of beer you both like. When it goes online onto forums I can see the danger.

I see that issue with hype and how people get angry at times, but there’s always people who take things too far, but you just need to avoid them.

I also get how purists get annoyed about milkshake IPAs and all those photos and stuff, but I like to drink juice bombs and I think they’re fun. I think you need to understand there is a culture around this stuff too and there’s always been a cultural aspect to craft beer.

If you want to see and hear what BAOS is up to, you can head here. 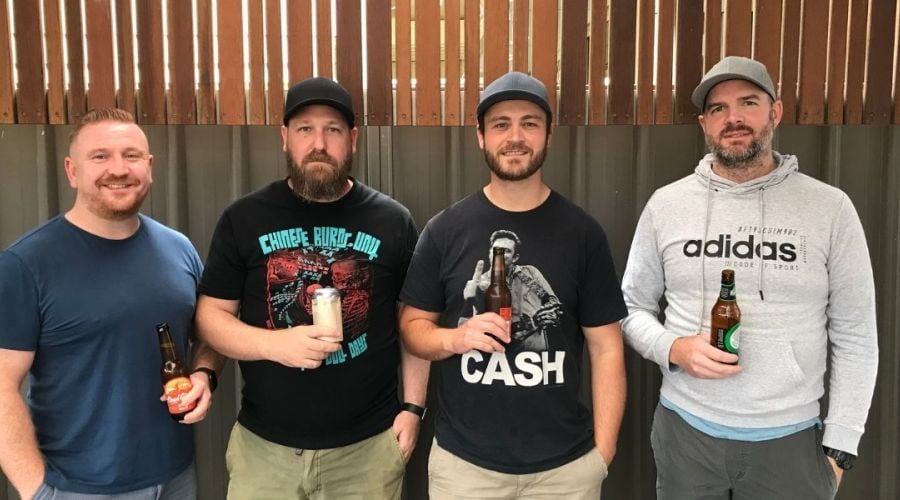