In recent years, breweries have been opening in all manner of places across Australia – and soon you'll find one at Melbourne Airport too. Collingwood-based brewing company Stomping Ground today revealed they're to build their third brewery in Terminal 3 after operating a pop-up beer garden between Terminals 3 and 4 over the past two summers.

It will be only the second airport with its own brewery in the Southern Hemisphere and continues Stomping Ground's phenomenal rise; they don't celebrate their third birthday until next month and only recently confirmed plans for a second brewpub in Melbourne's south-east.

And it means travellers will be able to choose from more than 20 locally-brewed beers when passing through the airport – up to four brewed onsite and the remainder coming from their main site in Collingwood and the forthcoming Morris Moor operation.

“Melbourne is our home and we're incredibly excited to be bringing Stomping Ground to the airport," says Justin Joiner, co-founder and director of venue operations at Stomping Ground.

He says the plan for the brewing side of the operation is for it to "essentially be a fun R&D setup for small batch keg beers mainly for our own venues", with head brewer Ashur Hall overseeing brewing across all three sites.

"We certainly plan to give others in our brewing team opportunities to flex their brewing muscles too," Justin says.

It turns out today's announcement was two years in the making: back then, the Stomping Ground team approached the airport about opening a venue there. While there were no leasing opportunities at the time, it did lead to their pop-up venue and, subsequently, an invitation to tender for a permanent venue inside the airport. They did so with global food service and hospitality company Delaware North and made a winning pitch.

The airport bar will sit roughly halfway along Terminal 3 (the Virgin Australia Domestic Terminal) on the site currently occupied by Fly Bar, which will be expanded by roughly a third for Stomping Ground. As well as the beer – including tinnies for takeaway – they'll be offering their full beer hall food menu.

While the team behind Stomping Ground have broad experience in the wider hospitality and events scene – Justin's business partners Steve Jeffares and Guy Greenstone are also owners of The Local Taphouse in St Kilda and run the annual multi-city GABS festival – this new venture will pose new hurdles.

"The airport is unlike anywhere else we have operated," Justin says. "Whilst the challenges aren't insurmountable, nothing is as simple as it would be in our existing venues. Security is the obvious one, especially since the venue will be airside.

"Everything – including each bag of malt – will have to be scanned through security as you would your hand luggage."

It goes further, too, due to the nature of airport life.

"It is really like a mini city with tens of thousands of staff working around the clock to keep things going," he says. "We've learned that you need to be really organised as it's hard to just do things on the fly – deliveries need to planned and booked in with loading docks, staff need security passes, car park access, Sky Bus discounts, the list goes on.

"Being able to learn the patterns of trade [operating the pop-up venue] has been interesting as well: the airport tends to be very busy at times our city venues aren't, and quiet when they are."

The Stomping Ground team believe this will be just the fifth brewery within an airport anywhere in the world, the others they've come across being Airbräu (Munich), Cigar City Brewery (Tampa), Tivoli Brewing at Tom's Urban Kitchen (Denver) and Airport Craft Brewers (Johannesburg).

The opening of the brewery bar is part of a move by the airport's management to revamp their offering and bring in some of the best known names from Melbourne's café and bar world. Joining Stomping Ground are Pickett’s Deli and Moors restaurant from Melbourne restaurateurs Scott Pickett and Shane Delia respectively, EARL Canteen, Cobb Lane, Axil Coffee Roasters and Proud Mary.

Melbourne Airport chief of retail Andrew Gardiner said: “Melbourne is one of the world’s top food destinations so it is important that our food and beverage offering reflects the amazing variety of food found across our wonderful city." 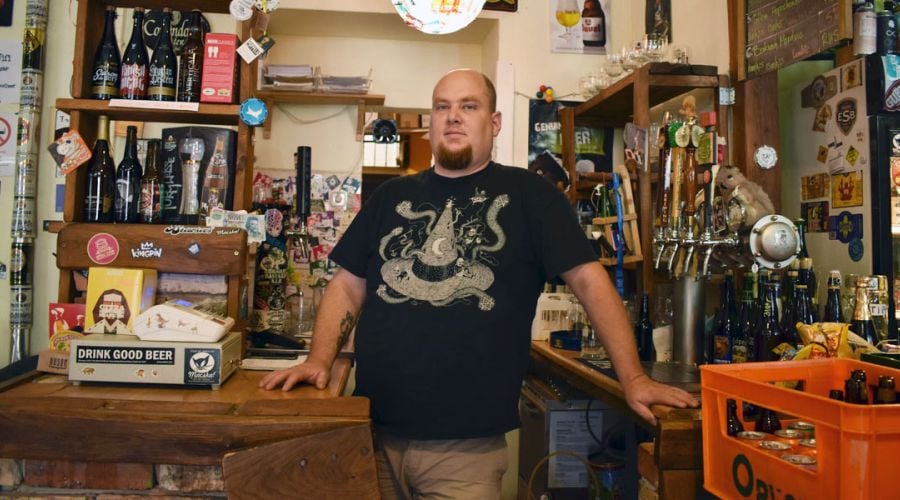