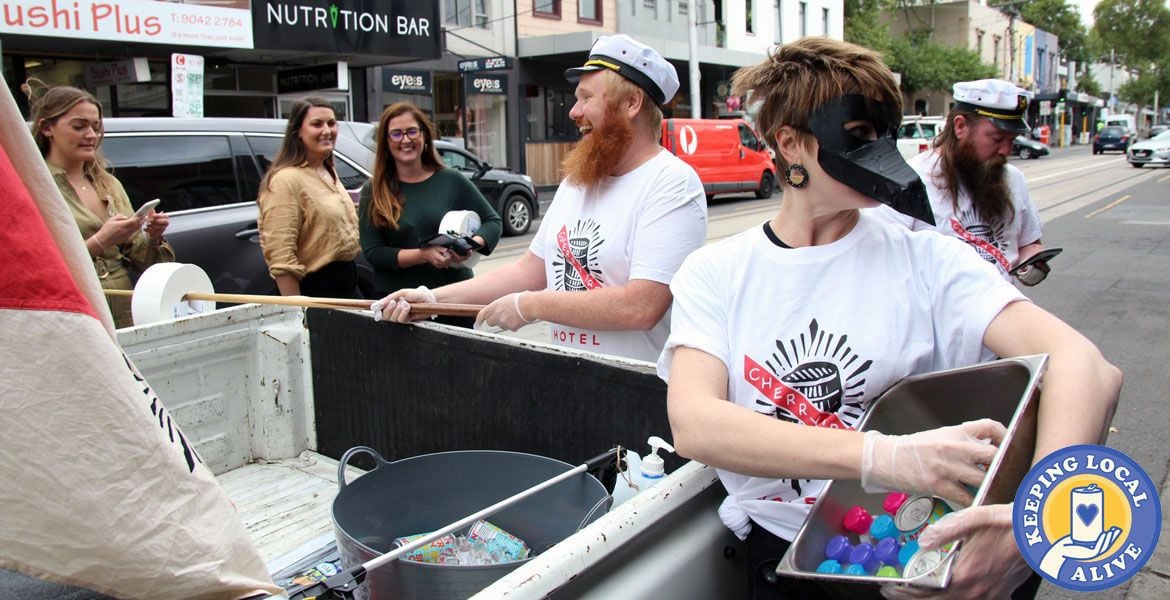 The sounds of David Bowie belting out Let's Dance bounce off the walls of Swan Street as a man stands atop a white Ute in front of Coles, waving a giant red and white flag.

A few feet to his right, an elderly chap crouches to unlock his shopping trolley from a lamppost as a beaming, bearded man races over: "Do you want some toilet paper? Or hand sanitiser?"

Bemused, trolley now unlocked and stuffed with a giant toilet roll and a bottle of sanitiser, the old chap moves away as behind him a young woman in black face mask hands out cans of Moon Dog Beer Can (and more hand sanitiser) to passers-by.

Welcome to day one of the Cherry Tree Hotel's home delivery service.

As part of the #keepinglocalalive campaign in support of the local beer community, which launched at the weekend, we're collating the ways in which people are adapting to this new reality and aim to provide daily stories from the frontline to offer ideas, inspiration and, maybe, a little hope.

"People were a little taken aback," Toby Kingsley, Cherry Tree manager and aforementioned beaming, bearded man, says of their launch. "They were asking how much we wanted for it."

The hope is the pub will be able to retain all of their staff through the coming months too. And, if the evidence of today's jape is any guide, put smiles on plenty of people's faces along the way.

"We want to keep our head above water and people off the dole queue," he says. "And add a certain amount of levity as well.

"We also want people to stay at home – there's good reason to. If people are going to the shops, it adds to the exposure, so if we can drop food and drinks at their front door it's better."

Once they'd finished their performance on Swan Street, they returned to the pub to wait for orders to come in before embarking on their first "grog run". It's one that comes with more than just a delivery to your door and a welfare check, too: music blaring; staff dancing down the street; as Toby puts it: "It's us bringing a bit of the pub to them."

They're far from the only businesses offering home delivery whose staff hadn't even considered it as an option a week or two ago (although they might be the only one using a pool cue as a means of handing out toilet paper while respecting social distancing requirements). Venues and breweries are repurposing the staff they can afford to keep as delivery drivers and order packers. Others, like Ladro, have launched drive-up ordering where customers don't need to leave their vehicles to make a collection, and colourful pop-up drive-thrus are appearing underneath roller-doors all over the country.

If anything, it shows just how creative and nimble the industry is, especially when people are scrambling to survive in a world that's changing several times daily. And, in the case of The Cherry Tree, how people are coming together to help each other.

One of the many agencies based near the pub, Icon, jumped on board when they heard about their plans to move to online orders and home deliveries. Within days, they'd built their website for them – on the house, of course.

The pub has a couple of nurses within the team who had been leading training exercises for staff around how to operate amid the pandemic; others had helped fix up the Ute now doing deliveries; and after they created their first batch of hand sanitiser in-house (to the WHO approved recipe), Boatrocker jumped on board to create the next one for them.

Aware of what was coming, The Cherry Tree crew had been discussing contingency plans for a month before the shutdown, with deliveries just one part of it. They're working on a plan to stream their weekly trivia and DJ sets into people's homes, putting together a cooking show teaching people what they can do with limited resources, and considering adding to their delivery offering to include other essential grocery items.

"We've all got to pull together at the moment," Toby says. "It's everyone doing what they can to get through this situation. It's good to be part of something where we're in a unique position to do this.

"We've just got to think laterally. There's no easy answers and I'm learning on the fly every day."

Looking ahead to a return to normality – whatever that will be – he says: "If we can keep the pub going and we can all get through this, I'm going to the happiest I've ever been."

Articles by James
#keepinglocalalive home delivery postcards from the edge