“After slowly and painfully seeing most of our crop dying before our eyes due to Australia’s most intense drought ever, it has been backed up by major catastrophic bushfire.”

“Today we went through and inspected the aftermath, swept the ash up from the shed and essentially said goodbye to Season 2020.”

Well before most Australians had heard of COVID-19, parts of the local beer world were facing another threat as one decade rolled into another and large swathes of Australia burnt. The horror bushfires season saw taprooms closed, visitors forced to evacuate towns, and holidaymakers stranded on beaches.

For Ryefield Hops, the small, family-run farm in the south of New South Wales, they welcomed 2020 with the grim reality their entire crop for the year was gone. The quotes above were posted by the hop farm team at the start of the year and the pictures taken at the same time show a landscape worlds removed from how it should have looked at a time of year when lush green bines would normally be reaching for the sky.

Located in Bemboka on the South Coast, the former dairy farm had seen no significant rain in the year prior and, while the team initially hoped some of their hops might survive the dry conditions, the fires that tore through the bone-dry region and the resulting thick smoke haze effectively brought an end to the year's yield.

The 2019/2020 season was meant to be a major harvest for Ryefield too; they’d constructed an additional ten acres of new hop plantings, bought a mechanical harvester, and work was well underway on their new processing shed to improve their ability to deliver hops to the nation’s craft brewers.

Jade McManus, who launched the hop farm in 2016 with their sister Karen Taylor and Karen's husband Morgan, told The Crafty Pint that in a pandemic year of pivots and change Ryefield’s focus has been on rebuilding and future-proofing.

“This year, it’s just been trying to claw back what we lost last year,” Jade says. “While also putting in security measures – mainly around water – so that we’re never in that situation again.”

Those security measures are in part thanks to the Help A Hop campaign Ryefield launched in January just as most of their plants were destroyed; the hop growers were also supported by various parts of the beer industry, including through the Resilience Beer brewed for bushfire relief.

“At the end of last season, it was pretty hard in terms of motivation,” Jade says. “After the bushfires, we definitely felt a lot of great support from the beer community in terms of helping us and giving us that morale because they were reaching out. Then COVID hit everyone.”

As for water security, Ryefield recently finished building a 20-megalitre dam and they’ve also invested in a new greenhouse that can hold 3,000 cuttings at a time, as well as completing work on their new processing shed.

“[The dam] will give us approximately three years' water security,” Jade says.

“It cost quite a bit but it is something that’s necessary in the climate we’re operating in at the moment.”

Jade says this autumn's hop harvest won’t even be as big as what they hoped to obtain in 2020, due to last season's damage.

“It’s whole hundreds of metres where there’s about one plant,” they say.

“Our main focus is to propagate and catch up all the ones we lost from the drought and to also plant out the rest of the field.”

If there’s a benefit to be found in starting 2021 with a smaller crop, Jade says it means they can run their new processing equipment with a lighter load and therefore be better prepared for a fuller farm in 2022.

“We do need to look at the positives,” they say. “And the positives are that we have got things now in place that give us more security, and that was unfortunately a really hard lesson for us. I think it’s also been with everyone in COVID; it’s your resilience and how your business is set up and what kind of impact it can take.”

The end of last year also saw 4 Pines and Landcare Australia – through 4 Pines’ commitment to 1% for the Planet – work to support Ryefield’s sustainability efforts. Through it, Landcare help identify the sustainability needs of the hop growers and design and deliver revegetation and conservation efforts. Jade says, as farmers committed to organic, sustainable and regenerative agricultural practices, it’s been really positive to have others recognise what they do and get behind it.

“It’s not cheap to do landcare work, it’s quite expensive actually,” they say.

“We farm how we do farm because we don’t want to just take from the land but give back as well.”

In terms of the hop varieties brewers can look forward to obtaining from the South Coast farm, Jade says Cascade, Centennial and Saaz cover the most land, with Victoria, Chinook and Columbus covering smaller blocks. They’ve dropped Hallertau due to its low yields and fellow German hop Hersbrucker due to limited interest from brewers, much to Jade’s disappointment.

“It’s a really nice hop,” they say. “It makes amazing tea … chamomile hop tea with the Hersbrucker is just great.”

There is one other traditional European hop they've kept growing, however: the English classic Fuggle.

“Batch did a beer with it and a few people have shown a bit of interest so I think it will be a good one to keep on,” Jade says.

As for what keeps them keeping on at Ryefield, as a farmer Jade talks in seasons and years. So, while the farm’s looking far lusher in 2021, it’s 2022 they're really looking forward to.

“Getting that will feel good, and getting into the rhythm of having a full field and that rhythm of the growing process.”

For more on Ryefield Hops, check out their website. 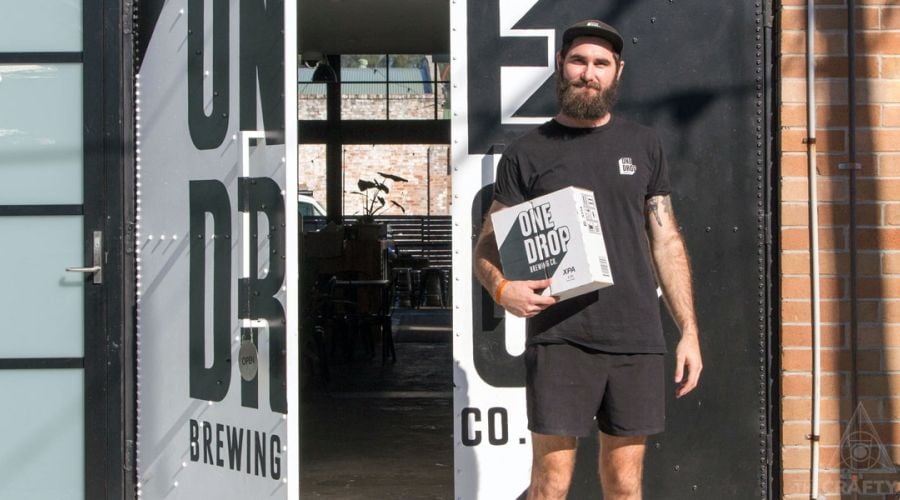 3 Ravens have announced plans to build a home in WA as well as upgrading their brewery home in Thornbury. We caught up with head brewer Brendan O'Sullivan and general manager Nathan Liascos to find out more. read on