Over the past half decade, we’ve seen all manner of hazy / cloudy / turbid beer styles appear within the ever more loosely defined realms of IPAs. But is their time in the sun approaching the end?

We’re not talking about the renaissance of West Coast style IPAs here, either – and nobody will be rushing to proclaim a sudden reboot of Bruts – but breweries in the US continue to work on new ways to deliver hop-derived goodness straight to your olfactory system, and a few locals are looking on eagerly for ways to enhance their own offerings.

Dip hopping is a technique that’s neither new, nor born in the USA, but it’s one some American brewers have been taking an interest in as a means to promote desirable hop aromas and cut out those they don’t like. It doesn’t hurt that the process’ name is ripe for puns either.

In the May/June issue of Brew Your Own, American beer writer John Holl discussed the technique’s rise with several American brewers. Its origin stems back to 2012 when Kirin were using it to remove myrcene, a hop oil that’s often associated with grassy, onion or garlic flavours.

Some years ago, a couple of American brewers from Portland’s Gigantic Brewing visited the Kirin-owned Spring Valley Brewing and were impressed with a pale ale containing Apollo hops, which presented in a beer in an unusual way. Having learned what they could while in Japan, those Gigantic brewers starting implementing the technique back home, and it’s been bubbling away ever since.

For brewers using the technique, the appeal has been the way it offers brewers a new way to use hops and brew more classic West Coast IPAs without including capturing some of the more pungent notes that can be extracted from hops.

Melbourne’s Boatrocker Brewers & Distillers have picked up on the technique and – we’re happy to be corrected on this – appear to be the first local brewery to release a dip-hopped IPA in cans. They’ve done so with the 7.5 percent ABV Space Cowboy, which they’ve labelled a Big Dip Hopped IPA.

It’s brewed with Strata, Columbus, Centennial and Citra, the foursome presenting quite a punchy combination of tropical fruit, with some softer floral undertones and substantial bitterness yet without any grassy notes.

Boatrocker co-founder Matt Houghton (pictured on the left behind the bar at the top of this article) says that was the idea, one sparked by the above article, with the process reminding him of his days before turning pro.

“As a homebrewer, we used to make hop tea,” he says. “You’d steep your hops in hot water or wort to extract aroma and whatever else.”

In some ways, dip hopping is hop tea writ large, but Matt says the important difference with the process on a commercial scale is using a pressurised fermenter to blow off myrcene. Although water and wort can both be used to make the tea, they decided to use water to avoid any risk of DMS off-flavours, which are often described as being like cooked corn. Matt says they added 77-degree water and steeped it on the hops for an hour in a closed tank.

“The heat that comes off is building up pressure in the fermenter,” he says, “and we open up the blow off arm periodically, three or four times, during that hour and it drives off the myrcene content.”

The appeal for the Boatrocker team is the ability to brew a highly-hopped IPA without the risk of those myrcene qualities dominating; through that, he believes it opens a new way to explore classic hops that are sometimes pushed to one side in favour of fruitier new varieties.

“I thought we could maybe look at some hops that are overlooked that might traditionally have massively high myrcene levels,” Matt says.

“This might open up another dimension of what a hop is or what it can be. Which I think is an exciting thing for us.”

He describes Columbus as a natural fit for Space Cowboy – it’s not one of the cool kids and can be associated with high myrcene levels and with an onion character.

“I love Columbus so I’m really keen to see what else we can extract from that,” he says.

Matt says feedback to date from the Boatrocker team and wider public has been quite positive; he sees the process in some ways as bridging the gap between West Coast IPAs and hazies.

“I get NEIPAs, but they’re not my cup of tea – I like bitter West Coasts,” he says. “But I love what biotransformation does to hops and I think this gives us a bit of a best of both worlds scenario.”

Also making their way to the Antipodes are “Cold IPAs”. While the style might not be as pun-ready as dip hopping, it may well prove to be well-suited to Australia’s climate. According to Kevin Davey, head brewer at Portland’s Wayfinder Beer, the style was born from his feeling that many India pale lagers (IPLs) could present as a little clunky, driving him to take a new approach to the style. He used a lager yeast, fermented at an above normal temperature, while also dry-hopping the beer like an IPA and adding adjuncts like corn or rice in the malt bill in the way many classic American lagers do.

It might all sound rather close to a hoppy lager, an Italian pilsner, or even a very hoppy steam ale but Kevin writes in New School Beer that it’s a different beast:

“It has a magnificent hop aroma, clean assertive bitterness and a bold, clean finish that makes the drinker crave another sip,” he writes. “I felt it needed a name to differentiate it. So it’s a bit Wester than West-coast, it’s crisp and sessionable, but strong and sneaky. It’s Cold IPA.”

Mick O’Rance, head brewer at Sydney’s Sunday Road Brewing, says he read that story with interest and felt Kevin’s thoughts were similar to his own on IPLs, a style he doesn’t mind but doesn’t love.

“It rang a few bells for me because I haven’t had any great IPLs that have really knocked my socks off,” Mick says.

Mick says he was eager to try the approach and Sunday Road's founder, Brad Walker, was just as keen, having got his hands on one brewed by Garage Project. Vacation Rental was the result, with the beer containing 15 percent flaked corn in the malt bill and a trio of Cryo hops, Ekuanot, Sabro and Amarillo with Mick saying he wanted to use all Cryo as it fitted with the “cold” theme of the beer – Cryo hops are created at a very low temperature.

Pitching his lager yeast at 14 degrees, Mick held the temperate there for close to a day and a half until it started bubbling away, then raised the temperature slowly as the beer fermented.

“Once it bubbled, I let it have another day at 14 to get a start going, and then I ramped it up to 16 on day two and a half roughly, and after a couple of days at 16, I put it up to 18 and it got up to there and kept bubbling away.”

Eventually, Vacation Rental hit 19 degrees, with Mick saying the logic behind the steady increase in temperature was to scrub any sulphur from the finished beer.

“By cleaning up that that sulphur, it gives you more of a clean canvas for the hops to jump off, so it’s more about the hops than the thumbprint the yeast might leave behind,” he says.

In the glass, Vacation Rental is as bright and clear as a lager but, as soon as you smell it, it’s closer to IPA territory, with the beer’s 6.8 percent ABV and substantial bitterness – 45 IBU – further pushing it in that direction.

“It’s almost seven percent alcohol and it’s super smashable,” Mick says. “It’s not dry, but it is sort of crisp on the finish, which just keeps you wanting to keep going back for more.”

It struck a cord with the rest of the Sunday Road team too, meaning they’re keen to brew it again.

“If I brewed it again, I’d probably keep the grist bill exactly the same and probably change the hops,” he says. “We’re so spoilt with new hops.

“We probably released it at the wrong time of year, in another few months when it starts warming up it would work really well.”

As for whether it’s an emerging beer category or just a change in process, Mick believes it’s an adjustment; like Matt, he sees these new processes as exciting, even if they are small.

“I quite like the little adjustments in processes to come up with something different rather than adding in any crazy stuff,” he says.

“It’s basically like an IPL, but it’s a reinterpretation. It’s not a revolution or anything like that but just a slight adjustment.”

Whether the above represent mere adjustments or the birth of new styles – and whether they’ll take off – only time will tell. One thing for sure is that Boatrocker won’t be dipping hops alone; Mick says the article we’d sent him last week had already piqued his interest during Sydney’s lockdown.

“I’m working from home today and I’m actually writing a recipe for one.” 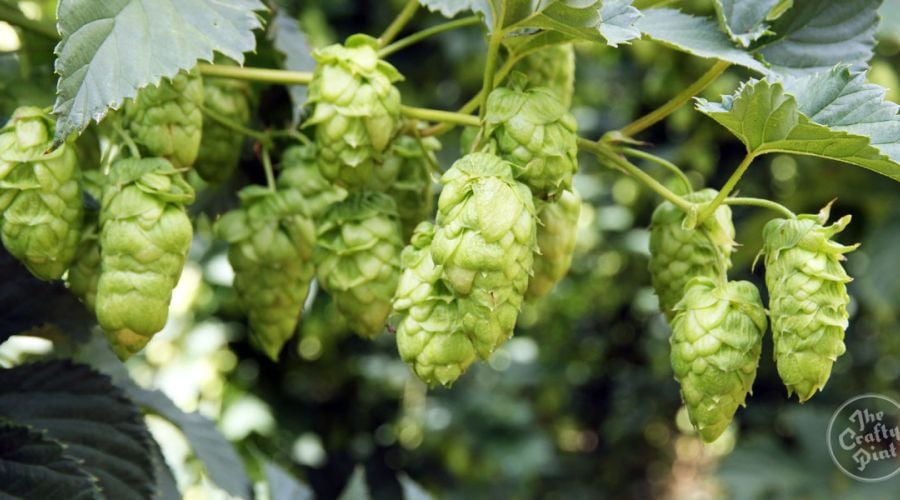 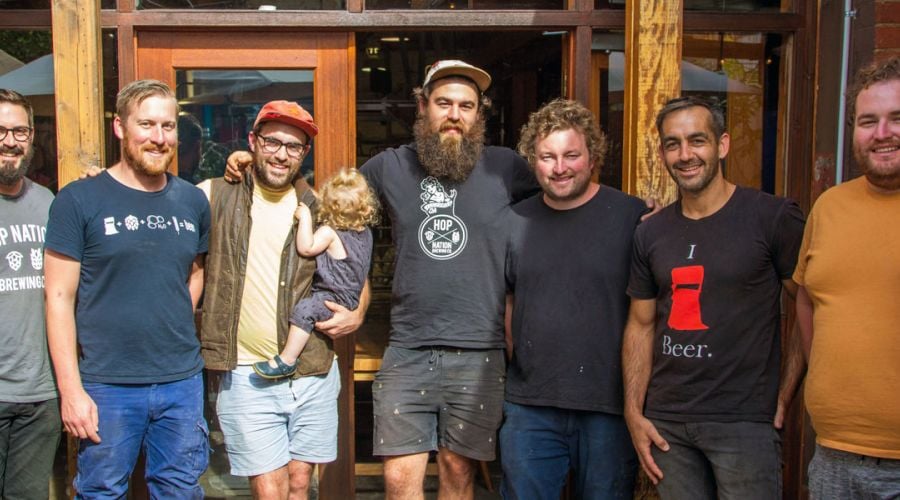