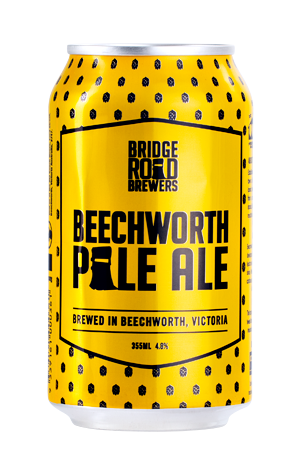 The beloved Beechy Pale has been flying the flag for Aussie brewed American style pale ales longer than most and remains one of the finest and most enduringly popular examples of the modern style.

Originally inspired by the hoppier variations to come out of the States, it's a beer that's been in constant and steady evolution for well over a decade. What's remained consistent through the tweaks in hop selection is, well, its consistency: a beautifully balanced blend of fruity hops – melon and gentle citrus led the way in the first batch of cans we tried in late 2019 – and light, biscuity malts. Soft in body, with a touch of sweetness sitting alongside a bitterness that's present without being obtrusive, it's stood the test of time for a reason.

Even after all these years, it remains Bridge Road's benchmark beer, one that always polls well in the annual Hottest 100 and critic’s polls, and a good shout for the tag of "Aussie classic".