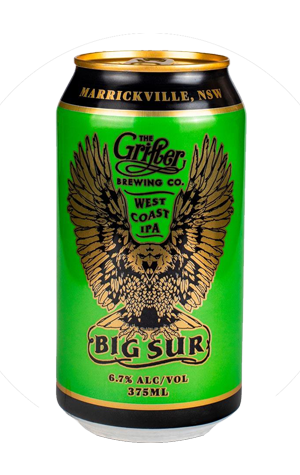 When you decide to launch a West Coast IPA, there's a prerequisite that you've gotta go big on the hops. For the Big Sur IPA, the guys at the Grifter Brewing Company met that expectation head on and then some with the inspiration apparently coming (and who can be sure how jokingly) from the desire to "experiment with how many hops we could add to the kettle before we blocked the heat exchange". That attempt to bust the brewhouse - courtesy of the Columbus, Citra and Simcoe hop varieties - evidently failed though because they were able to carrying on brewing and produce this cracking beer.

Full, as you might expect, of hoppy character (think grapefruit and pine), yet it remains remarkably sessionable - at least, as much as a 6.7 per cent hoppy beer can be. The IPA is a style the Grifter boys say they love and when you add Big Sur to the excellent Marnie's Majority, which is only released annually, that love is really being put on show. Then again, when it takes an 18 hour brew day to create this beer, you've gotta love what you do.

Having been an irregular release through their gypsy brewing days, the opening of the Grifter brewery in Marrickville meant Big Sur could be made available all-year round.