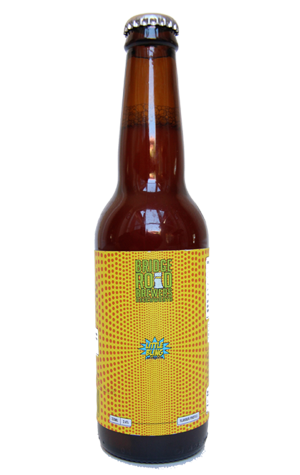 First there was Bling. Then came Bling Bling. Next up was the new, improved Bling. And now there’s Little Bling, as Bridge Road adds a third blingy string to its roster of IPAs (not counting the rather lengthy list of single hop IPAs, such as Galaxy, Summer, (St)Ella, Vic Secret, even Pride of Ringwood, of course).

The Little Bling is, as the name suggests, the smallest of the Bling family but equally eye-catching in its choice of clothing, opting for a mildly hallucinatory skin of vision-wobbling boldness. And it is, in the spirit of the phrase used by Russell Crowe to describe ciggies in The Insider, effectively designed to be a “lupulin delivery system”; in other words to convey as much hoppiness to the drinker as possible without pumping too much in the way of booze into them.

This it does via the means of a rather pretty looking, vaguely hazy, rust-coloured drink, with the hop aromas it delivers a melange of stewed citrusy, grassy and piney sorts. The clue that the beer is lower in alcohol than the norm for such a hoppy beer is in the mouth, where it’s pretty light across the palate thanks to a malt character that's restrained thus paving the way for the hops to finish things off with a distinct and lingering bitterness.