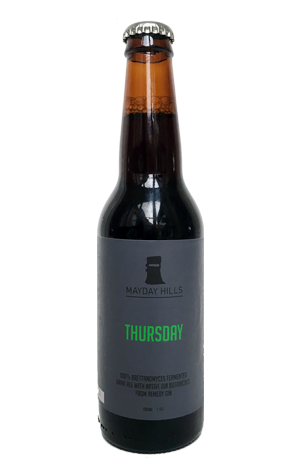 Bridge Road Brewers is already up to beer number five in its Mayday Hills program, beers that are fermented with Brettanomyces yeast in the brewery's large oak foeder and celebrate the produce of the region around Beechworth. Thursday represents another leap in concept from the previous four, this time by virtue of being the first dark ale in the series, one which features spent gin botanicals from Reed & Co's Remedy Gin.

The botanicals were added to the boil and during fermentation on two separate Thursdays (hence the name) and they're certainly the stars of the show. While the first aromas when beer hits glass are of the chocolatey dark ale ilk, they're soon subsumed by floral, herbaceous, foresty and sharply spicy characters reminiscent more of a cocktail than a beer. The fruity characters present in previous Mayday Hills beers are less discernible (although experience suggests these beers evolve over time), while there's a drying herbal finish that leaves you in no doubt that, like Maxim Reality in 1994, this beer's got the Remedy.