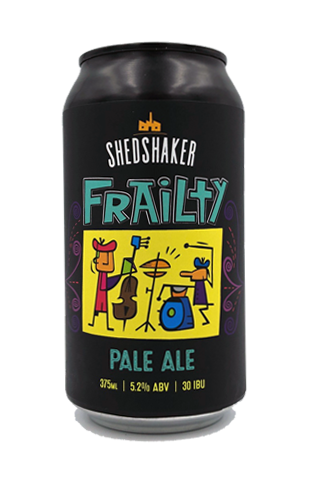 In 1986, the Australian rock outfit Hunters & Collectors released their fourth studio album, named after the term the band used to describe alcohol. Human Frailty was both a commercial and critical hit for the band and cemented their position in the annals of great Australian bands.

Thirty years later, Hunters & Collectors drummer Doug Falconer is part-owner of a brewery in Castlemaine, and the brewery owners couldn’t resist making a beer to celebrate the album. Perhaps Australia’s first beer named after an album that is named after beer, Frailty is their take on an American pale ale with a light, biscuity and nutty malt profile.

Described by the brewery as a style that acts as a comforting friend to all beer fans, Frailty features the well known American hop triumvirate of Chinook, Cascade and Centennial, with their presence more apparent to taste than on the nose. With the brewery team unable to resist the shared moniker, the beer is also dry-hopped with the Falconer’s Flight blend, completing the picture for a beer that shares as much in common with English as American pale ales and which, during winter 2019, became their first canned release.