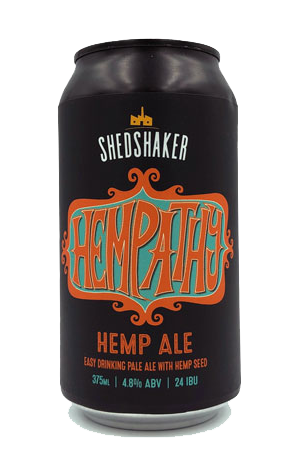 By virtue of its close association with marijuana, Australia's hemp industry is a fledgling one. It was only in November 2017 that laws regarding the consumption of hemp-based products changed and now hemp farming is becoming serious business. It’s also an industry championed by many in the know, including the CSIRO who, when running the inaugural Australian Hemp Conference, asked Shedshaker to brew a beer just for it.

To meet the brief, the Castlemaine brewery enlisted the help of Bunjil Farm in nearby Kyneton who provided hemp seed meal for the beer. That seed meal makes up ten percent of the beer, which is otherwise a fairly straightforward pale ale. Rye was also thrown into the mix, which – along with Saaz and Goldings hops – was chosen to support to the hemp’s spicy, nutty and earthy/twiggy qualities, which are the dominant flavours of the beer, supported by a little peach and a low bitterness.

The beer was quite the hit at the conference and has since become a permanent member of the brewery's lineup and one of the first two beers they've canned.