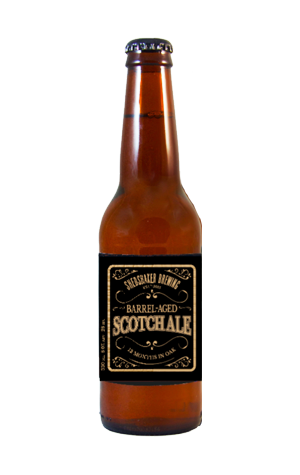 With Melbourne's reputation well and truly cemented as a ripe destination for craft beer tourism in Australia, it's little surprise that regional Victoria is seeing more and more breweries pop up. But, while many of these fledgling operations are still establishing their foundations, breweries like Castlemaine's Shedshaker, which was launched in 2014, are hitting their stride. With a now well-established core range, they're able to play in the fringes, producing multiple iterations of niche style, limited releases.

Shedshaker's Barrel-Aged Scotch Ale was first brewed in 2019. Half went to the brewery’s taproom for exclusive sale and the rest into barrels for release in 2020. Such was its success, the brewery has followed up with a 2021 version.

Aged in a cabernet barrel from Boomtown Wines, this "Wee Heavy" lives up to the moniker. Deep, crystalline brown in colour with a delicate, creamy head, contrasted by bold, potent aromatics, it presents itself as something of a shipyard bruiser, dressed by Kinloch Anderson.

On reaching the palate, pretences are dispensed with. Malt is expectantly at the fore of this full-bodied ale. The 8 percent ABV is present, but smooth, and there’s a welcome hint of peat. It lingers on the palate long afterwards and lends itself to savouring over an hour or so.

Shedshaker’s Barrel-Aged Scotch Ale is not without depth, but it’s in no way James McAvoy, and every bit Gerard Butler.