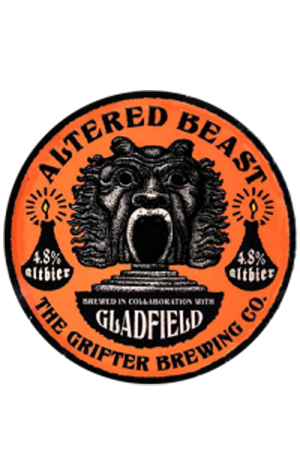 There were several reasons for the team at The Grifter Brewing Company to get excited about the 2018 BrewCon conference and its associated awards, The Indies. At the latter they won a trophy for The Omen, their oatmeal stout, while for the former they created a new beer: Altered Beast.

It’s an Altbier made in collaboration with Kiwi maltster Gladfield so, as you might therefore reasonably conclude, it’s a beer centred around the malt character. That’s thanks to a medley of five varieties (Munich, Aurora, Chocolate, Crystal and Toffee, if you’re a devil for the detail) and these help deliver a beer that’s perhaps most easily described as “nice”. That’s neither faint praise nor veiled compliment, simply a reflection on a beer that isn’t especially showy in nature, one characterised by a pleasant touch of toasty and sweet malt character, a balanced hop profile, just a little bitterness and an otherwise clean finish. Altered Beast is no blockbuster, nor is it a cheap thrill. It’s just, well… nice.