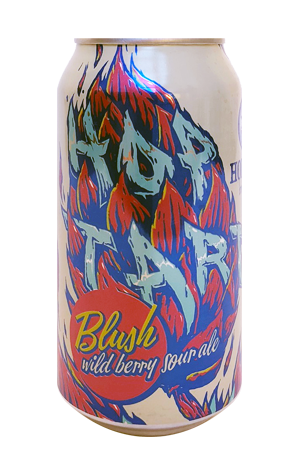 Time will tell but, if such hybrids do become a mainstay of the industry, Holgate's Hop Tart may well come to be seen as something of a pioneer. While it's not the first local release to have combined hops and acidity, what they tag a "semi-sour pale ale" is, we believe, the first of its kind to be placed within a brewery's core range, appearing there in summer 2015/16. That said, knowing how things work these days, should such beers blow up it will likely be a brewery with rather less years on the clock than Holgate – 20 in 2019 – that new-new-new chasing drinkers will smother with hype...

Anyway, this is all a rather circuitous way of getting to Blush, the first of what we believe is to be a series of beers that riff off Holgate's base Hop Tart, in this case by adding wild berries in the tradition of Belgian fruit beers. The name is rather appropriate as it's not quite pink and pours far brighter than most beers of this ilk (or, indeed, most beers released today, period), looking rather like a lightly frothed rosé. Light, lifted and slightly sweet summer berry aromas hit you first and, as with the original, the "sour" is more of a tangy clip than anything likely to trouble the side of your palate, with the whole package the sort that deserves to become a fixture in many a summer barbie/beach/festival Esky.

There's a heap of launch events for the beer too: