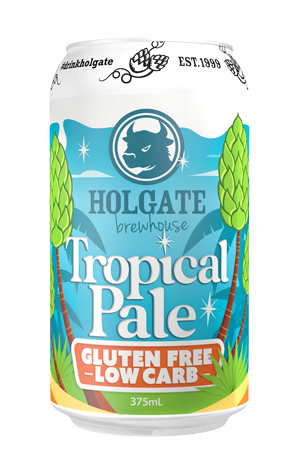 There doesn't seem to be too much the brewers at Holgate won't turn their hands to (well, at least in the world of beer); just a glance at their gold medal-winning beers at this year's Australian International Beer Awards throws up Russian Imperial Stout, Sour Brett Ale and a red IPA (of which more later). They were one of the first Aussie craft brewers to release an alcohol-free beer (the silver medal-winning Love All) and here enter the realm of not just gluten free but also low carb with Tropical Pale.

It started out as a project for one of the brewery's Woodend regulars, Dave Edney, a guy with a storied career as a brewer in Australia – not least at Mountain Goat – who has more recently discovered he has coeliac disease. It sees them using brown rice, white sorghum and dextrose in place of more typical brewing malts, in conjunction with much more typical hops: Mosaic and Amarillo.

Pouring pale golden and clear as you could wish for, there are hop-derived, melon-led tropical aromas alongside something more mandarin-orange while those hops add a decent clip of fruity bitterness too. It's pretty lean and dry and, while an experienced palate will be able to tell it’s not gluten-based, it still lives up to its billing as a crafty pale.

As for the red IPA, their annual autumn-into-winter seasonal Campfire is back. We included it in our Best New Victorian Beers of 2021 and the brewing team has hit the mark once again. If you like the style, you'll want to hunt it down. If you don't, it might win you over.