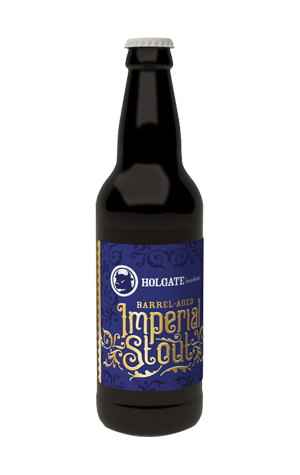 Given the carnival freakshow nature of parts of the beer world these days, there's a good chance when you pick up an imperial stout there's going to be some element of pastry-ness (is that a word?) in the mix, or at least some sort of off-kilter ingredient. Travel back in time a decade and such beers weren't always thus; their arrival every winter was still cause for excitement but typically the most out there they'd get would be time spent in barrel.

Holgate's 2022 release – an AIBA gold medalist last month – is very much in the latter category: more traditionally-minded, and also the sort of beer to put hairs on your chest. The weapons of choice here were ex-pinot noir barrels, with the liquid spending no less than nine months taking shape before bottling, and don't you just know it. There's an oaky, drying coconut top note accompanying the deep, dark chocolate rising from what's a gorgeous, thick, jet black pour crowned by a steepling dark brown head.

Give it a swirl and it's almost like oil in the glass too, with flavours of espresso roast and the darkest of treacles joining the party. In time, there’s leather and dark dried fruit trying to escape from the gloop too, while the barrel time adds some serious drying tannins alongside the bitter roastiness, doing their best in tandem to cut through the heft of the 10 percent ABV liquid.