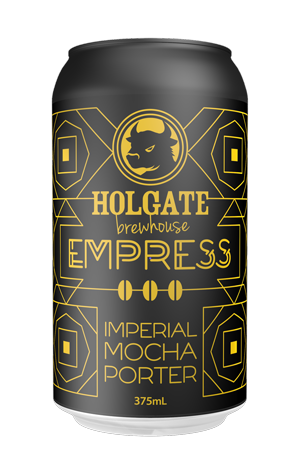 Beers such as double digit booze imperial stouts or porters would always get the fancy bottle treatment in years gone by. Indeed, they've tended to make the transition into cans later than most other styles made the move. And in releasing their Barrel-Aged Imperial Stout 2022, Holgate stuck with glitteringly-labelled bottled. Here, however, their Empress – now 11-years-old, believe it or not – goes into cans, and not even 440 or 500ml ones, either. It does, on the other hand, get a fancy new label design to give it some visual heft.

If you've not made her acquaintance yet, the Empress is the elder statesperson to their Temptress chocolate porter: a 10 percent ABV imperial porter featuring cold brewed coffee, cocoa and vanilla. This time around, it reminds me of a mocha as much as ever, with plenty of creamy vanillin nougat character wrapping itself around the dark fruits and darker chocolate. A gentler wintry compatriot to the brewery's aforementioned Imperial Stout.