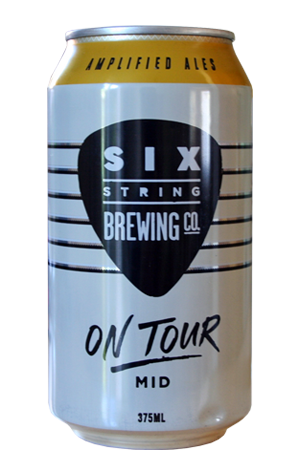 Miraculously timed for the arrival of the warmer weather, the Six String Brewing Company has ventured into the mid-strength market with On Tour, a beer to take with you wherever you venture this summer.

This is a category that was once frowned upon by a hardcore craft beer crowd determined to be defined by anything other than the kinds of beers the big brewers would generally make. But, over the years, a degree of pragmatism has taken hold. It turns out quite a lot of people quite like drinking beers that allow you to remain upright rather than requiring a nap after downing a can. A fairly reasonable prospect, all things considered.

On Tour is thus the possessor of a fine bready body, which is the first thing to capture attention before you’re pulled towards the hop character. It’s less fruity than it is floral and comes coupled with an earthy character and ever so subtle spicy element before finishing with a pleasant dryness. This is an easy and pleasing beer, just what you want in a middie.