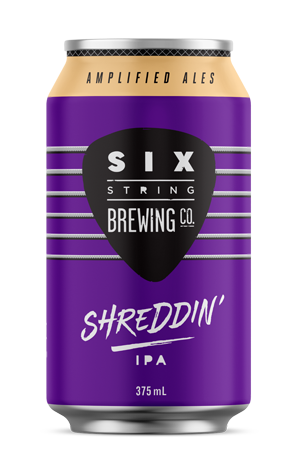 This is the sixth beer to be added to Six String’s core range and it's one which, due to legal reasons, had to change its original name – Strata-Caster IPA – as it was too close to Fender’s trademarked Stratocaster guitars. The arrival of the Shreddin’ IPA completes the set for Six Strings fans, however, who are now able to grab a mixed six featuring the Erina brewers' accessible core range.

The original name references the Strata hop, one that's very much on trend: a multi-layered variety that underwent eight eight years of development as part of the Oregon State Aroma Hop Breeding Program. It adds a lovely balanced bitterness – rather than a screeching guitar solo in yer face – to a tropical fruit and citrus led middle eight, complemented by a subtle dank chorus you’ll soon be singing to your neighbours over the fence.

So, grab your best glam rock vinyl record, crank it up to 11 and enjoy this sessionable IPA on these crazy, crazy nights as we hope for a return to normality.