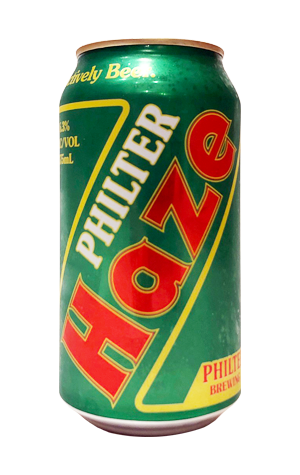 Philter have joined the haze craze and done so in the typical fashion, calling their new IPA, simply, Haze and giving it a lively retro feel with cans inspired by 80s soft drinks but also recalling a casino. And, as is their wont, they've aimed to produce a beer that checks the boxes you'd expect from the style.

Double dry-hopped with Mosaic, Galaxy, Simcoe and Citra, it's golden and hazy with a dense head that crawls down the glass. There's paw paw and passionfruit aplenty in a beer that sits in tropical fruit / brekkie juice territory, albeit with hints of something a little deeper and danker underneath. Full, soft and creamy on the palate, with a bitterness of the citrus rind variety, it's essentially, what you'd hope for in a beer called Haze.