Few breweries have burst onto the craft beer scene quite as triumphantly as Philter. A mere four months into existence, with only two beers to their name, the brewing company took home one of the most coveted titles in Australian beer – Champion Pale Ale at the 2017 Craft Beer Awards. It turned out the fun, retro-style cans that had just begun appearing on bottleshop shelves (and which saw Philter collect a second, tongue-in-cheek, award on the night) actually had some serious stuff going on inside of them.

Perhaps that shouldn’t come as too much of a surprise considering the brewer behind the beers is Samara “Sam” Füss. Over more than a decade and a half in the industry as one of Australia’s first female head brewers – and one of its most colourful characters, she’s held brewing positions across the country, including stints at Little Creatures in Fremantle and Young Henrys in Sydney and a couple of roles in Melbourne too.

It was Sam’s mates Michael Neil and Stefan Constantoulas who first proposed the idea of Philter over a few beers in a Marrickville backyard. Both men happened to be neighbours with a wealth of business and marketing knowledge accrued at large companies – Mick at surf lifestyle brand O’Neill and Stef at liquor giants Lion and Beam Suntory. They just needed a brewer to complete the story and, conveniently enough, they knew one.

Wanting to hit the ground running, the beer Sam pitched first was a sessionable, easy-drinking XPA. With the idea of the end product in mind, recipe development took place in Tasmania, shared equally between days in a mate’s 300 litre brewhouse and those spent fishing (beer needs time to ferment, after all). The trio was after something quaffable for a lazy afternoon, but also something of high enough quality that it could be professionally critiqued. In other words, they wanted a beer that could be deeply thought about, but didn’t have to be.

That ethos has held true through the rest of the beers in the Philter brand, which, although the name may suggest otherwise, are and always will be unfiltered. Rather, the name comes from an archaic name for a medieval elixir, like a love potion or aphrodisiac. Hence the brewery’s tagline that adorns every can: “Seductively Beer.”

The biggest step taken since launching occurred in August 2020 when they shone a little light into what's been a rough year for the beer world and opened their Public Bar in Marrickville, the suburb that's the heart and soul of the brand.

The former yoghurt factory is also home to their own brewery – you can read about their search for it here – and comes with a fit-out was designed with a nod to the building’s mid-60s design and heritage as well as the 80s Australiana that has driven Philter’s can designs.

The space uses some of Sydney’s colourful hotel history to evoke suburban pub nostalgia: hand-painted signage and handmade tiles inspired by the iconic inner west bars of days gone by; a bar top rescued from a pub that was redecorating. There's a deck area connecting the Public Bar to the state-of-the-art brewery where you can view brewers at work.

"This is our home," Michael says. "It’s where the heart of the brand has always been, and now where the bricks and mortar can showcase a great immersive encounter with Philter."

It was an eclectic collection of winners at the 2018 Australian International Beer Awards, with WA's Beerland taking out Champion Australian Beer and other major trophies for Mountain Goat, Green Beacon, Black Hops, Fixation, Brownstone, Philter and even one of our own.

As Barrow Boys winds down and West City Brewing makes a comeback under new ownership, we speak to three other brewers about the challenges facing gypsy/cuckoo/contract brewers in today's evolving beer world.

Three years on from launching their first beer, Philter have found a site for their own brewery. It's in Marrickville, the home suburb of the brewing company's founders, and will add to the area's vibrant indie brewing scene.

If you've been involved in the local beer industry over the past decade or two, you'll have a story or three to tell involving Sam Füss. The multiple trophy-winning brewer from Philter joins us for day 19 of out Advent Calendar. The Philter brand was born in Marrickville, during a neighbourly backyard chat over beers. And Philter’s new brewery has just opened in Marrickville, with a public bar to give locals a way to drink Philter beer fresh from the source. So it’s only fitting the first beer to come out of the brewery pays homage to the suburb where it all started. Marrickville Nights is called a hoppy dark ale, but don’t expect it to be black - it’s more the golden brown of a lion’s mane, sitting in the glass… Read more
Rich Brown Philter set out from the start to make drinking beers. Sure, beers with flavour and character but, more than anything, that you'd want to put away then have another. A stack of awards would suggest they're doing a pretty good job of making such beers well and it's likely this IPA, the fourth addition to the core range, will see the brewing company headed by Sam Füss continue in that vein. It's a beer that does what it promises on the tin – passionfruit, grapefruit and orange aromas welcome you… Read more
Golden Yellow 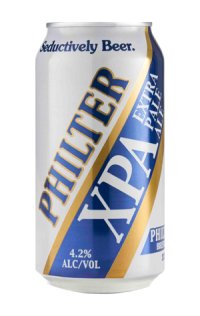 When a new brewery launches, they can only hope their first beer is one that helps them hit the ground running. It has to establish the ethos of the brand and stand out from the rest, both in terms of the quality of the beer and its appearance on the shelf. Safe to say, when Philter XPA launched in early 2017, it met those expectations. Like most first born children, it’s an overachiever, winning the coveted Champion Pale Ale title at the 2017 Craft Beer Awards at the tender age of four and a half… Read more
Pale Yellow 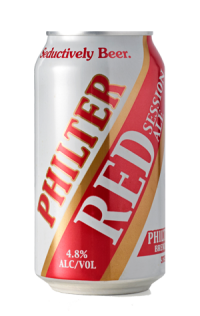 The second beer to be released as part of Philter’s core range arrived just in time for winter 2017 and came in the form of a red ale. Although nothing could top the success of the XPA, the first batch of Red still managed to score two silvers at the same awards at which its older sibling took out Champion Pale Ale. The copper-hued Red displays its sessionability with just the right amount of crystal malt character. There’s enough to give it a bready profile – even touch of berry that lingers… Read more
Red Before the launch of Philter’s third beer, the rumour around town was that this was going to be a “classic Aussie” kind of beer. The previous two can designs featured bands of blue and gold, then red and gold, so it seemed almost a given that this was going to be green and gold. What could be more Aussie than that? Instead, it was a totally new colour scheme, as if someone had put the XPA through the “inverse colour” option on MS Paint, featuring a thick gold band and a dark blue colour… Read more
Golden Philter take pride in making easy-drinking, sessionable beers, and they’ve built themselves a great reputation doing so. Head brewer Sam Füss isn’t a fan of huge bitterness herself, and the beers she makes encourage you to enjoy several in quick succession. But that hasn’t stopped her from making this beautiful beast of a double IPA. The aroma is all sweet comfort – tropical and citrus hops combine with golden syrup malts promising to give you a big, warm hug. But take a sip and you'll… Read more
Golden If there’s anything more typically Australian than a tinnie of beer, it’s our surf culture. Better yet, it’s swigging from a tinnie of beer after an afternoon of surfing. Combining these two great Australian pastimes is what inspired Mona Vale-based surf movement M/SF/T, makers of custom surfboards and apparel, to team up with Philter to create this post-surf summer smasher. In true blue fashion, it’s a no bullshit beer that allows the hops to shine, like the glistening afternoon sun on the… Read more
Golden Yellow Philter have joined the haze craze and done so in the typical fashion, calling their new IPA, simply, Haze and giving it a lively retro feel with cans inspired by 80s soft drinks but also recalling a casino. And, as is their wont, they've aimed to produce a beer that checks the boxes you'd expect from the style. Double dry-hopped with Mosaic, Galaxy, Simcoe and Citra, it's golden and hazy with a dense head that crawls down the glass. There's paw paw and passionfruit aplenty in a beer that sits in… Read more
Golden If you'd drawn one conclusion from the first 12 months of Philter, the Sydney based brewing company that snaffled a trophy for its XPA within months of launching, it's that here was an operation with a penchant for creating flavoursome beers in tight, approachable packets. (Alternatively, you might have looked at the cans and assumed they were NASCAR-following, Stuyvies-smoking bogans who just happened to love craft beer.) So the choice of beer to mark their first anniversary may have come as something… Read more
Black