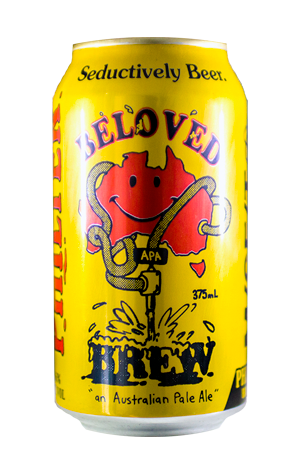 If there’s anything more typically Australian than a tinnie of beer, it’s our surf culture. Better yet, it’s swigging from a tinnie of beer after an afternoon of surfing. Combining these two great Australian pastimes is what inspired Mona Vale-based surf movement M/SF/T, makers of custom surfboards and apparel, to team up with Philter to create this post-surf summer smasher.

In true blue fashion, it’s a no bullshit beer that allows the hops to shine, like the glistening afternoon sun on the perfect wave. An all-Australian lineup of Vic Secret, Ella, Cascade and Topaz give a massive burst of citrus and tropical fruit flavours that crash against the tongue like seawater over a reef break. In the end, it finishes decidedly bitter, yet refreshing.

The retro-style Philter can art has taken a beach holiday of its own, replaced by artwork of a tapped Australian map from M/SF/T art director “Rad Dan” Watkins - an obvious symbol that it’s intended to be a brew for the nation. A subtler indicator is that of the ABV, which coincidentally is the same as quite a few mainstream Australian lagers. Safe to say, this one manages to pack a lot more flavour within each tin.