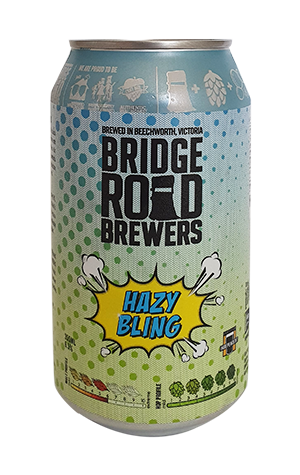 Bridge Road’s Bling is an elder among Australia’s hop forward releases; it's both one of the country's oldest continually produced IPAs and, as a result of taking some cues from the UK rather than the US, it looks a little darker too. With a rich mix of malts, the beer edges far closer to red IPA territory than many of its peers. And, while the Beechworth brewery has been a pioneer when it comes to brewing some styles locally, hazy IPAs haven't been at the forefront of the Bridge Road release schedule.

That brings us to Hazy Bling which, like the rest of the Bling series, holds onto that far darker, orangey-red hue. It's a colour you rarely see in hazy IPAs but elsewhere the beer has plenty that will be familiar to fans of the style. There's a soft mouthfeel and low bitterness that gives the hop flavours of peach, apricot and pine room to shine.