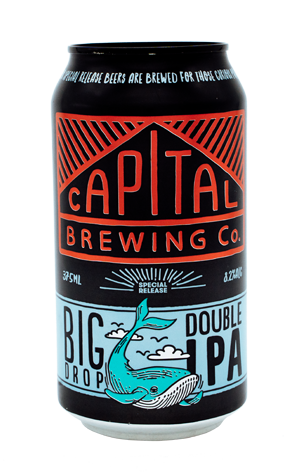 The beer lovers of Canberra know Big Drop. In fact, not only do they know it, many of them love it, with the beer picking up the second highest number of votes from ACT in our Best New Beers Of 2019 – So Far roundup, enough indeed to put the beer in our top 20 nationwide. And that's when the beer was still a draught only release the brewers had been tweaking over the past couple of years.

Now it's been given a limited release in cans so punters further afield can get their hands on it too. The brewers talk of green melon and lime, while I picked up mandarin, orange and papaya aromas too backed by a little booze and caramel sweetness, maybe even a little blackcurrant. Essentially, there's heaps of hops at play (twice the amount found in their Rock Hopper IPA, apparently), with the malt backbone seemingly there merely to keep the beer from running totally amok and provide a broad canvas for you to take in all the hoppiness.

Undeniably big (the name kinda gives it away) but with the flavour to back it up.