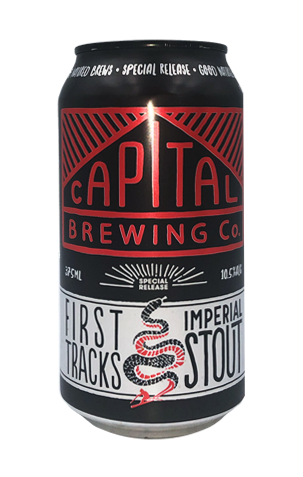 It's a beer with a background story that runs to a few chapters. Then again, First Tracks is a beer that tells quite the story of its own. So let's start at the very beginning...

The OG First Tracks was Capital's first ever seasonal release: a coffee-infused 5.2 percent ABV stout conceived with their coffee roasting mates at ONA. It's returned every winter since and their friendship even led to the formation of a heavy metal band named Peril featuring both brewers and roasters. In recent years, ONA's head roaster Danny Wilson has been devising ways for coffee and alcohol to complement each other, twice winning Australia’s largest coffee cocktail championships, and finishing on the podium at the 2018 World Coffee in Good Spirits Championships.

So... hard music, hard booze, a spirit of collaboration and experimentation. Where's that likely to end up? In this can, it turns out, in the shape of a 10.5 percent ABV imperial stout featuring different coffee blends and extraction techniques and the introduction of oats to soften and round things out.

Which brings us, finally, to the liquid. And I have to say my first impression, as glass passed under proboscis, was none other than: "Ooooh!" It's black AF, like dark matter. Impenetrable. Even the head would qualify as a brown ale if it were in liquid form.

A freshly ground espresso blend hits first, but with a liqueur like vibe – maybe it's more an after dinner coffee with a shot of liqueur in its midst? Indeed, the whole experience conjures thoughts of the post-dinner experience – the fancy chocolates, the move to gradually harder liquor, the slipping into something more comfortable (if that's still possible in these COVID times when you've spent three months in trackie dacks). While possessing a silkiness, it's not as fat as such a big beer could be, with the bitter dryness and a roasty edge seeing to that.

tl;dr: A story worth telling. A beer worth savouring.