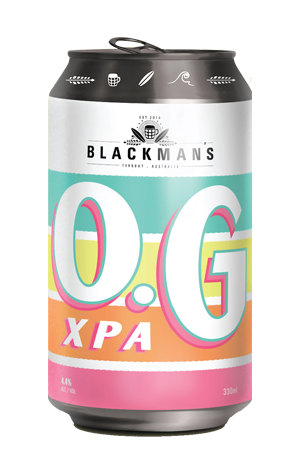 How can a brewery, even one as good as Blackman's, claim an XPA as the OG when there are so many around these days? When OG refers to their latest venture: a new beer and burger bar in Ocean Grove, just a few kilometres down the road from their OG brewery in Torquay. They pour a bunch of Blackman's beers there but the brewery team felt it also deserved one of its own.

It's a beer that slots neatly into the part of the beer spectrum that increasingly appears to be where craft brewers aim when designing something approachable and with broad appeal. Where once it might have been a kolsch or pale lager, or more recently a golden ale, contemporary affairs tend to be much like this: pale as, light-bodied, with lean floral, citrusy and tropical hops washing over just a little sweetness. There's a hint of resinous bitterness, but nothing overly distracting in a beer they'll be expecting to become a locals' fave at their third home.