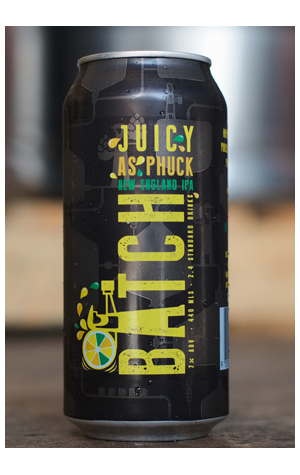 As trite as they can sound in certain contexts, the phrases “becoming who you are” or “finding yourself” ring true for most of us. As we go through life, the years teach us things and help us to grow into ourselves in a way that we could never have imagined in the past. We become a truer version of ourselves. And we can apply this same philosophical psychobabble to Batch Brewing’s Juicy As Phuck, which has undergone a recipe change that brings it more into itself.

After a few batches to fine tune the new recipe, the brewers landed on a juicy IPA for our times. They reduced the ABV from more than eight percent down to seven, dropping any heat it held before; they changed the yeast to have a leaner profile, allowing the hops to shine even more brightly than before; and they streamlined the hop bill to just Azacca, El Dorado and Galaxy, with the latter two bringing huge fruit salad to the aromas and the front of the palate, while the former provides a comfortable cushion of earthy flavours to fall back on.

Times change. Expectations change. So this IPA changes to continue to give us a beer experience that we can keep describing as juicy as… well, you get the idea.