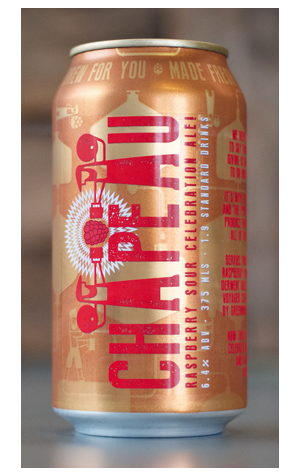 It’s mid-December, and you know what that means – we celebrate another year of Batch's beautiful existence in our beer sphere with another year of Chapeau Raspberry Sour Celebration Ale.

So, what’s the same with this year’s version, and what’s different?

In 2017, we told you about the way Batch were sourcing their raspberries from small producers in Tasmania. And, even though so many of us were prevented from travelling interstate this year, that luscious red fruit still made its way up from the Derwent Valley to Sydney’s Inner West. Chapeau is as red and vibrant as ever, and even though my household ate four punnets of raspberries in four days last week (80c a pop from the markets - bargain!), I still think drinking a glass of Chapeau was the most raspberries I’ve consumed in a single sitting all year.

In 2019, we told you Chapeau’s relatively high alcohol content (compared to the river of mid-strength fruit sours on the market nowadays) would give you the liquid courage necessary to tell your annoying co-worker Gavin that his handwriting is, quite frankly, atrocious. This year, Chapeau’s ABV may have dropped slightly, but it still sits at a comfortable 6.4 percent ABV. And, while Gavin has been working from home all year and keeping his chicken scratch to himself, his hairless cat has been walking in front of his webcam every time you have a Zoom meeting and there was that one time he yelled at his kids without muting his microphone, so you should still have plenty of fodder for insults.

And, in both 2017 and 2019, we began our Chapeau write-ups with the loose "you know what that means" formula, and I decided to continue that proud tradition this year. There’s been enough change in 2020 as is.

Perhaps the biggest difference about this year’s version is not the liquid itself but the packaging: the 640ml bomber bottle has been replaced by a 375ml can. Not surprising considering Batch’s mass conversion to cans this year. But the question is: is this a good change, or a bad change? On the downside, showing up to a friend’s house with a bomber of Chapeau always had a slightly fancy feel to it, like you were sharing a bottle of French wine. But, on the plus side, the new cans are rose gold with a golden lid to provide distinction from the rest of Batch’s range, so they maintain a level of decadence and luxury.

The new packaging also opens up the possibility of buying a four-pack of Chapeau – or, if you’re feeling a bit Bougie, a whole case – to keep the Chapeau vibes going through the holiday season and beyond.