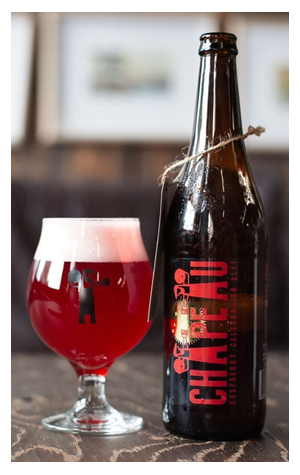 It’s Chapeau! 2019 time everyone and you know what that means?! Time to put on your most offensively idiotic French accent and wish Batch Brewing Co a bon anniversaire then do a whole lot of “oh hoh hoh” French grunting. It’s OK – it’s all for a good cause and you can’t be cancelled for being racist towards the French, it’s the law.

Chapeau! is Batch’s annual birthday beer, a raspberry kettle sour. A fruited sour beer isn’t quite as crazy in 2019 as it was six years ago, but you’d be hard pressed finding a better one. What is a kettle sour I hear you ask? Well, as I was going to say, before you so rudely interrupted me, kettle souring a beer is the process of inoculating wort (essentially, a liquid full of the sugars extracted from grain) with a lactobacillus culture while still in the kettle. The lactobacillus bacteria create lactic acid from the sugars in the wort and that acid is what makes the beer sour.

Once this now sour wort hits a desired pH level, the usual beer process starts again. The wort is boiled in the kettle with the hop additions then cooled for the normal fermentation stage. Boiling the wort kills the lactobacillus so they won’t continue to produce lactic acid, but the lactic acid produced before the boil hangs around for that wonderful tartness we’re all gagging for.

The obscene amount of raspberry loaded into Chapeau! gives the beer an unmistakable iridescent red hue and massive berry juiciness. It’s sharp, refreshing and allegedly 6.9 percent ABV, which, if we can be real here for one goddamn second, makes Chapeau! the beer version of Sweet Berry Wine. Take along a couple of bottles to the work Christmas party and you’ll absolutely be not only the coolest person there, it might finally give you the courage to tell Gavin, that snivelling little weasel, what you really think of his appalling penmanship.