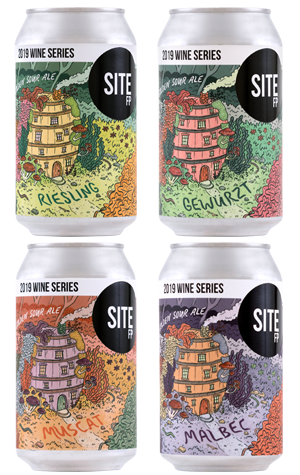 The weaving of their lives past, present and future continues for Sam and Dunc at Hop Nation with the release of the 2019 Wine Series. It's made up of a quartet that all underwent a similar process: discarded grapes from wineries across Victoria were added to the brewery's foedre-fermented sour blonde ale before undergoing a period of ageing in barrels; barrels that, in a fairytale kind of manner, appear on the labels as homes surrounded by flora, bugs and fungi, presumably a reminder of how much nature is at play in such drinks.

I'm not sure if there's a proposed order in which you should take on the beers, but we started with Riesling, which features Yarra Valley grapes from Jamsheed. Very pale and hazy, this was the most overtly funky of our foursome, with barnyard characters leading the way and pushing the grapes' lively fruitiness into the background.

Moving to Gewurtz, here sourced from Hanging Rock Winery, in Macedon, the wine like character comes through much more distinctly, with the discarded grapes adding sweet, almost sugary citrus flavours. Countering that is a refreshing acidity bordering on the puckering.

Pick of the four for me was Muscat, which serves up a little farmyard funk alongside an intense fruit and floral character, courtesy of grapes from Quealy in Mornington. It straddles those two sides of the equation with aplomb, while a tannic underbelly balances its sweeter side and that refreshing acidity returns to add further texture.

Which leaves us with Malbec, the Wine Series offering that looks least like a beer and presents on the palate as the most overtly wine like too. The grapes from Mark's Farm, Benella, turn it a deep and cloudy monastic purple, while equally deep, earthy berry characters take centre stage too.

Taken together, it's an intriguing exploration of how the addition of different fruits to such a process can do more than just add the character of each fruit to a base beer, causing the liquid to follow different avenues too.