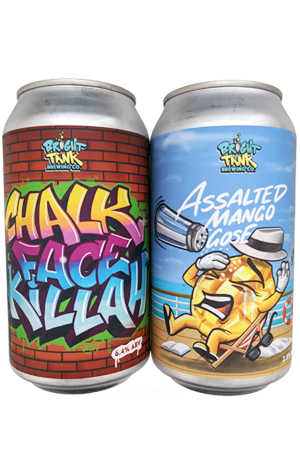 As he prepares to take up the reins at Pirate Life Perth, head brewer Jackson Purser’s parting gift to Bright Tank is a refreshed beer an one that’s, shall we say, having a little rest for a few months.

Chalk Face Killah has been around since the brewery opened and, while it's always been tasty, the completely redesigned 2020 release delivers on the promise. During the process the team decided the future of Chalk Face is one featuring hop rotation in order to maximise the expression; or, as Jackson says: “It’s gotta be the best beer you can make with this style, using the best hops available, not sticking to a recipe.”

And he’s certainly done that. Radiating opaque gold in the glass, with a moussey white head, Chalk Face Killah 2020 looks like a liquid Weiss ice cream bar, and feels similar on the tongue. Azacca now replaces Galaxy, while Citra and Cascade lupulin powder provide cohesive fruity support in the form of mango, peach and grapefruit in a manner that comes across almost like fruity bubblegum at times. There’s a spiciness in place of bitterness before a short, dry conclusion.

Reviving the Assaulted Gose range, the mango edition features more than 400 litres of mango purée – one-third of the beer's total volume. Understandably, you’re not going to miss it, but there's also a very fun coconut and lime sherbet character that lifts this well beyond a one-dimensional fruited sour. As does the clean, crisp coda that left owner Matty Moore recommending: “There’s gotta be at least one beer that you drink straight out of a can and, for me, it’s this.”

Available from the brewery with a launch party on Feb 16

Then selected WA retailers from Feb 17.