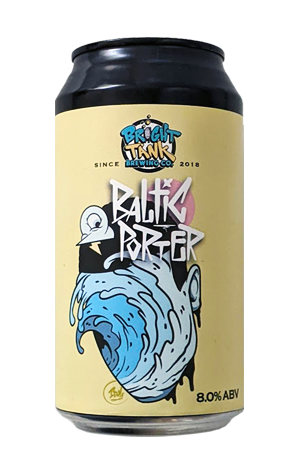 The Baltic porter may be beer’s equivalent of Southern rap. Using the template set down before, but removed from US East and West Coast beefs, the Dirty South spawned its own regional flair, before influencing broader pop culture through the Noughties.

Likewise, we have Napoleon’s 1806 trade beef to thank for the Baltic porter. Cut off from English imports, Scandinavian and Baltic brewers were forced to meet local demand, doing so with what was locally available. So, it was out with ale yeast, and in with lager strains; likewise for local malt, which was kilned cleaner thanks to tech developments and made for a smoother dark beer.

Back in the here and now, East Perth’s Bright Tank suffer no tariff pressure, but there is a deep love for hip hop at the brewery, and for dark beer. Both are entwined here as a smooth malt flow, with raisin and cola hints, cold drip coffee, touches of dark fruit and a little burnt brown sugar – albeit without the sweetness. Late dryness lifts a subtle roast and, if anything, Bright Tank’s Baltic Porter sits so closely to the style guide it’s so fresh and so clean, clean.

And WA stockists in limited release