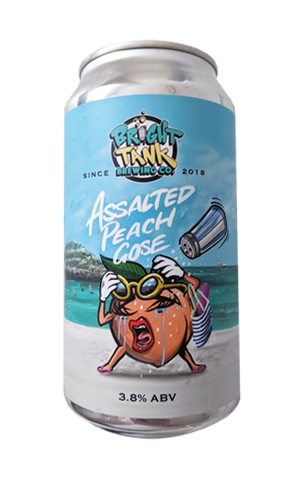 It’s interesting to consider what a brewpub team would have created for a mid-strength beer just five or so years ago. Chances are, it would have looked more like a malt driven Rogers' clone with more hops or some form of light lager – an afterthought at best. Yet, while not the reason for their rise to ubiquity, sours have certainly filled a hole most of us never considered: fruity, tart and highly sessionable beers which happens to be low ABV.

As such, in the 20s there would be few breweries without a session sour of some form in their lineup, as is the case with Bright Tank’s Assalted series. Following passionfruit and mango iterations, as summer approaches, the East Perth crew unveils Assalted Peach Gose. While there’s more restraint with the fruit addition than the mango madness, the peach is unmissable – there’s touches of fresh and tinned varieties, and its fruity appeal is balanced by a light brine and soft acidity, plus a light spritz aiding the refreshing, clean profile.