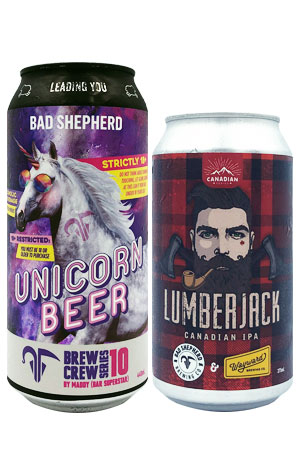 As is becoming increasingly apparent, not only have we reached a point at which the role of ABAC – the Alcohol Beverages Advertising Code – has become a weekly discussion point but we seem to have moved beyond that to a place in which brewers are deciding they're fair game. Take Bad Shepherd's tenth Brew Crew Series release, the Unicorn Beer. Unable to get such a beer, label design and all, past the pre-vetting process, they've instead figured: "What the heck – it's only a one-off release" and gone all out with a shade-wearing mythical creature flying through a neon hyperspace with stamps like "NOT FOR MINORS", "STRICTLY 18+" and "DO NOT THINK ABOUT DRINKING, TOUCHING, LET ALONE LOOKING AT THIS CAN IF YOU ARE UNDER 18 YEARS OLD" surrounding it.

Inside is a liquid that wouldn't be out of place in the flask of a mad scientist in some screwball 80s comedy - a deep purple that emits aromas that flit from sweet peach to floral. That peach is there on the palate too, alongside a dry finish courtesy of the champagne yeast and something a little herbal too, all of which comes to you from the mind of Bar Superstar Maddy.

Also new and in limited release from Bad Shepherd is Lumberjack, a Canadian IPA created with Wayward in celebration of their co-founders' shared heritage. Aside from the input of Dereck Hales and Pete Philip, the Canadian comes in the form of Gambrinus malts, Lumberjack hops and spruce tips. We've not come across this hop variety out of British Columbia before, but the grower's website describes them as "predominately bitter with notes of melon, sweet citrus, and spices like clove and allspice [and] a slight earthiness". In this example, the malt – sweet and bready – was to the fore with the spruce and hops coming across as a little spicy, a little piney and adding a touch of earthy bitterness.