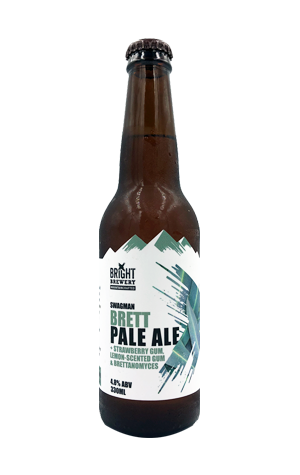 I was planning to kick off this piece on Bright's latest beer with a comment on how the appointment of a new brewer – and, in this case, a willingness to commit to their ideas – can really change the feel around a place. But then the label caught my eye and that suggested something else. The beer is technically called Swagman yet that name is shunted down the visual hierarchy so that BRETT PALE ALE catches your eyes first. It's done to such a degree you could imagine people will drink a few and have no idea they've been drinking Swagmen, but they'll know (in more ways than one) they've had some Brett pale ales.

It suggests a more educated consumer, one that is likely to be swayed by design and branding, sure, but who also knows what sort of beers they're looking for. And in this case, Bright figure there will be a fair few after a Brett pale ale. Admittedly, it's mainly a release for their Beer Mash members and their cellar door, but their sales manager persuaded them it was one that needed a wider audience.

As well as featuring a Brettanomyces yeast strain, it's also brewed with strawberry gum and lemon-scented gum and seems to swing through each of its parts then back again from sniff to swallow. There's a distinctive Brett character to the aroma, one joined as it warms by something floral and perfumed, then that native citrus and flashes of the tropical. There's greater sweetness and fruity spice on the palate initially before the Brett and bitterness come into play creating a somewhat acidic and drying tang.

It's joined in stores by a tweaked version of the Red XPA I enjoyed last winter; the new recipe delivers a deeper and heartier malt character than first time around, adding a bolder texture and leaning into red IPA rather than XPA territory.