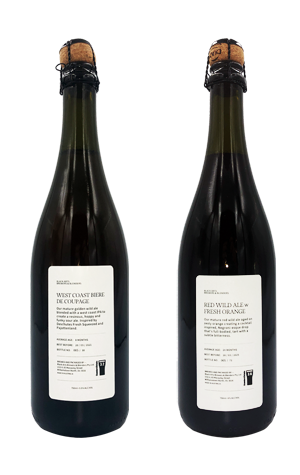 As part of my personal #keepinglocalalive mission – and fondness for such beers – when I spotted Black Arts were releasing a couple of fascinating sounding barrel-aged blends, I leapt onto their site and placed an order. This was followed by a message to brewery co-founder Joshua Murnane to check how wide the release was and, thus, whether it was worth writing about them for the site. It transpired there was just a few dozen of each...

Still, we figured it was worth sending thoughts into the ether, as much as anything as a reminder of just what he and Michael Leslie are up to at their tiny Williamstown home. What's more, the situation meant I could wait to try them at leisure rather than cracking, pondering and describing as soon as they arrived. Which turned out to be a rather good move.

The West Coast Bière de Coupage is, as the name suggests, a blend of West Coast IPA and their golden sour. It's one in which the latter contributes the greater part of the experience, one that's oaky, dry, delicate and balanced. Sure, there's a fruitiness and a little resin wrapped around that dry finish, but the pleasure here comes more from the well-integrated acid, the pleasantly building horse blanket funk on the nose and, most of all, its lovely structure.

The Red Wild Ale with Fresh Orange is Negroni-inspired and features a blend of liquids up to 24 months in age plus said oranges. There's much which hints at the cocktail that was the duo's starting point – even the carbonation is kept low – in a beer that unfurls each time you pour the murky russet-hued liquid into your glass. There's those Flanders red-esque aged, oaky, rich malts, flashes of anise and cola, a broad, vinous acidity and a leathery dryness too. As it warms, it's reminiscent of another non-beer beverage too: a lower ABV fortified wine.

Order direct from the brewery here