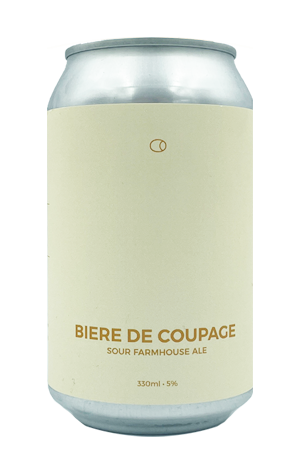 It's fair to say a drinker's first experience with a funky sour – and we're not talking kettle soured or sour pitched fruit juice here – can be confronting. On paper, many of the elements that can make such beers wondrous delights sound so wrong, and can easily smell and taste wrong on initial encounters. You can imagine Black Arts' freshly-canned Bière de Coupage being the sort of beer that could act as a bridge, showcasing those funkier elements, but dressing them up subtly enough as to not scare away too many newcomers.

The 2020 release is an exercise in delicacy, reining in some of the blending operations wilder edges without lacking character. It does so by blending their mature wild ale with a young saison. Funky Brett and light lemon aromas combine with an apple / citric acidity, a lively carbonation, and a tangy bitter-dry finish to create a whole that's equal parts introduction to what Black Arts and their peers do and a summery session beer for experienced souronauts. Yum!

Since launch, the beer has become a staple for the Williamstown operation, one that's led to spin-offs, and which was given a new look as of January 2022.