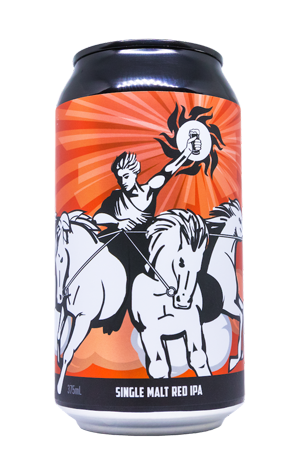 Samples of this beer were sent to two Crafty contributors at the same time and their reviews landed within 2.5 hours of each other. So I thought we'd run them together for a bit of fun...

When brewer Charlie Hodgson gets the chance to brew a beer with any of his mates from WA, you can always taste the friendship, and this collab between Helios and Nowhereman in Perth is no exception.

To be fair, though, the platonic love can only take partial credit for the rich flavours in this red IPA - Voyager Craft Malt’s SM-40 from Riverina NSW and the generous hopping schedule had some part to play, too. The SM-40 is also to credit for the dark red colour - what looks almost like a brown ale (even the head has a tinge of tan) is a deep ruby when backlit.

But the colour is just the forerunner. The real joy begins with the flowing aromas of stewed strawberries and plums. In the mouth, these fruit flavours are joined by dry toffee and burnt brown sugar, and it’s easy to imagine a fruit crumble fresh from the oven. Finish on a slow and steady bitterness with a touch of resin, and enjoy the punchy hops supported by powerful malt; or as I like to call it, the Hodgson Special.

The relationship between Helios and Nowhereman stretches back to the Noughties, when the Brisbane operation's head brewer, Charlie Hodgson, worked with the West Leederville head brewer, Eddie Still, at Gage Roads. As the decade turned, the pair were reunited at Mash and awards started piling up, including 2014’s AIBA Champion Australian Beer for their Copy Cat IPA.

So, the chance to collaborate during Brewsvegas earlier this year was too good to pass up, that is until it had to be passed up as a global pandemic scuttled the brew day. Luckily, the recipe was written, 90 percent of which made use of NSW Riverina maltsters Voyager Craft Malt's SM-40, and Charlie pushed on.

For all the celebration of hops, malt rarely gets the same consideration. SM-40’s similarity to Munich malt plays out here through a dark brown, ruby-tinged body with a latte coloured head, featuring caramel layers, a little spice / acidity and toasted bread. The medium weight resists sticky RIPA leanings in favour of full toasted malt characters and fleeting creaminess, before a lengthy dryness and lingering bitterness, the major legacy of German Amarillo, Citra and Idaho 7 hops.