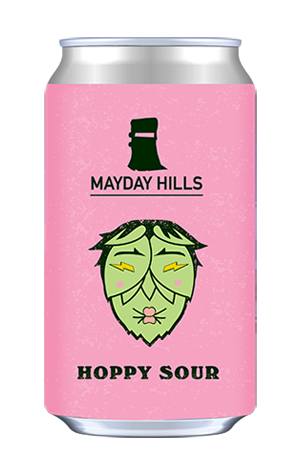 Am I the only one who sees the words “Hoppy Sour” and can’t help but expect a hoppy kettle sour? I blame the meteoric rise of kettle sours over the past few years for this - my brain has been conditioned to expect this as the norm. But Bridge Road’s newest addition to the Mayday Hills series is not a kettle sour; as with all other Mayday Hills beers, it’s fermented in an oak foedre, and develops its sourness from the yeast and bacteria therein.

So, while my brain had the misguided expectation of a zippy little thing with a clean, simple flavour profile - the Vespa of sour beers - the reality of the Mayday Hills Hoppy Sour had more to inspect and appreciate, with complexities aplenty, more akin to the vintage postie bike of sour beers.

This golden farmhouse ale pours a light brown that looks a lot like cloudy apple juice, which is perfectly fitting considering cloudy apple juice is one of the aromatic characteristics of the beer. But it’s not alone - as well as apple juice, there’s a gentle strain of medicinal phenols interwoven with the soft sweetness of grapes edging towards overripe. While it’s dry-hopped with familiar friends Galaxy and Vic Secret, the fruity hop characters are somewhat unfamiliar and fresh, like when your friend returns from a year overseas with a full-body tan, a rugged beard and some new laughter lines.

It’s sour but not sharp, complex without being confronting, and dry but never dull.

If that’s not enough to grab your attention, it’s also 3.8 percent ABV, and the second of the Mayday Hills series to become a year-round release.