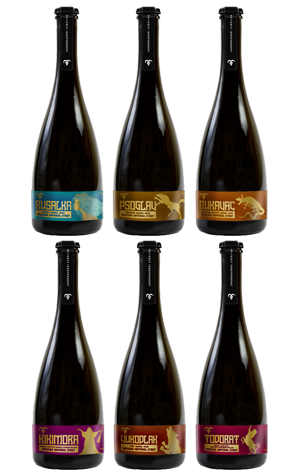 It's rare we add any beers to the site that haven't been tasted by someone in the team; in fact, I can't recall the last time we did. But sometimes it just makes sense, in this case because a) there's barely any of these bottles around, b) because we'd have to set aside so much time to do them justice they'd probably be sold out, and c) in stage 4 lockdown we can't even share them with Crafty team members or mates so we'd either be pickled or have one very decadent wastewater pipe leaving the kitchen...

So, instead, we'll have to rely on the Bad Shepherd team to tell us how they took Alkonost, which we did taste, divided it into six different barrels and created a sextet of beers called Rusalka, Bukavac, Vukodlak, Kikimora, Psoglav and Todorat...

Rusalka – aged in a shiraz barrel from Tellurian Wines: A beautiful, eternally young river fairy with flowing green hair, the Rusalka uses her beauty to seduce men to the water to drown them. The Tellurian oak barrel gives this brew earthy, rich, complex shiraz notes with hints of vanilla, creating a beer so seductive, you may want to drown in it too.

Bukavac – aged in a Starward whisky barrel: the slimy skinned six-legged Bukavac, with its large curved horns and long tail, drowns anyone who approaches its watery lair at night. But with the Starward Whisky barrel imparting its smoky, oaky, and slightly spicy notes, this is one smooth body of liquid you can approach with confidence.

Vukodlak – aged in a Port barrel from Buller Wine: with its werewolf origins, each night the Vukodlak shifts into a half-wolf creature. Like the Vukodlak, this beer has transformed with the sweet raisin tones imparted by the Buller Wine port barrels, to create a moreish, almost dessert-like beer that will have you howling for more.

Kikimora – aged in a French merlot barrel: the Kikimora haunts the darkest depths of your home. In the same spirit, we’ve gone to the darkest depths of Meatmaiden’s smoker to pull red gum wood for this barrel. With smoked wood and cherries, this deliciously rich and smoky beer will haunt you well after you’ve emptied your glass.

Psoglav – aged in a bourbon barrel from Jimmy Rum: with the hind legs of a horse, a human torso, and dog's head, the Psoglav shuns the light, living its life in dark caves hoarding treasure. The Psoglav’s most cherished dark treasure would undoubtedly be this big, luscious, boozy brew, with its charred oak and vanilla bourbon notes.

Todorat – aged in French oak: the darkest and most powerful demon in Russian mythology, the Todorat is one fiery creature, depicted as a half-human, half-horse. Similarly, we’ve aged this brew with poblano chillies along with a late addition of habanero chillies for a touch of heat to recreate the Todorat’s dark, fiery powers.