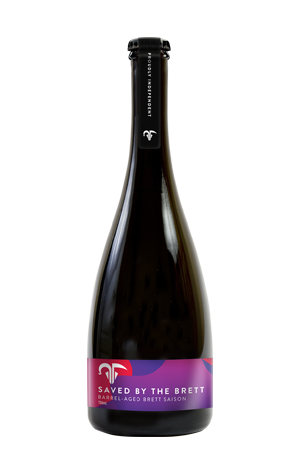 For years, brewers have opted to let drinkers know they regard a particular beer as a little bit special by choosing a fancy bottle. For certain beers some even use a cork and cage or dip the bottle in wax, a practice whose key purposes seem to be threefold: to create pre-consumption frustration; to risk the slicing of fingers and/or thumbs; and the one positive – to prevent you opening a beer you've been cellaring for ages late at night when you're no longer capable of removing enough of the wax to get to the cap, thus ensuring you save it for a more sensible moment.

In this can-dominated era, even a 330ml bottle can catch your eye, so when Bad Shepherd opted for these sleek-yet-curvy numbers for their imperial stout series and now this barrel-aged Brett saison you know it's statement time. In this case, it started out as wort from a passionfruit sour brew which was then combined with a saison yeast and Brettanomyces in a barrel before extraction and bottling.

Now, I'll admit I'm a sucker for such beers, but the combination of oak, Brett and saison doesn't automatically make for a beer worthy of such packaging. Thankfully, in this case, what's inside is worthy. Peaches and apricots sit alongside the funkier, barnyard-y Brett elements on the nose, while texturally there’s a quenching juiciness at play despite the meeting of acid and a sprightly, if short-lived, carbonation. As you'd expect, there's a dry finish yet it retains some lingering fleshy ripe nectarine sweetness too.

It might reference Saved By The Bell in its title, but it's a rather more serious and refined offering than that suggests.