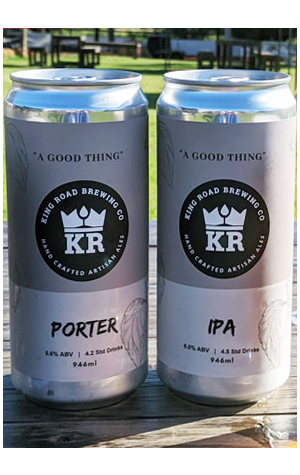 King Road’s first new releases since claiming Best New Exhibitor at the 2020 Perth Royal Beer Awards share appeal in common, yet their desirability will likely be split into two camps. The first is for the pointier end of beer, those always searching for something new or at least with a bold hop profile, which is where Strata IPA comes in. And boy does it!

Using predominantly Strata, with a little Mosaic and Citra, head brewer Steve Wearing has delivered a punchy, modern IPA featuring a diorama of flavour. A sample shared between four had comments of “peachy stonefruit”, “grapefruit and tangerine”, “pavlova toppings”, “strawberry and passionfruit daiquiri”, “background rockmelon”, “herbal touches” and “a tongue coating, moreish bitterness, which fades out rather than running short”. It’s safe to say this beer found instant favour with our quartet, and many who tried it at the Froth Town beer fest.

Which gets to Vanilla Porter, the playfully honest delight of the pair. Leading with chocolate malt tones and creamy vanilla panacotta which roll over toasted malt and latte, it's the kind of release which will likely have many locals on the King Road lawn raising a glass, saying: "Now, that’s a beer!"