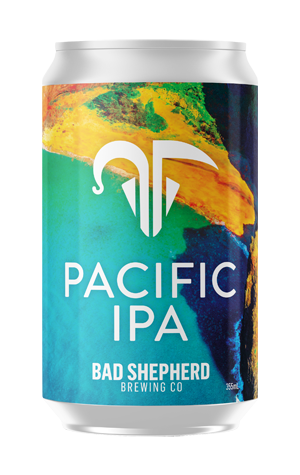 With brighter days seemingly ahead for Melburnians, one of the city's breweries has looked to capture summery vibes in a can. Bad Shepherd have added to their long-running IPA Series with Pacific IPA, one that's the lightest in the series in terms of ABV, yet still goes heavy on the hops: 15 grams per litre of fruity Galaxy, Mosaic, Vic Secret and Citra.

Clear and copper coloured in the glass, there's as broad selection of aromas and flavours as you'd expect with that hop combo: juicy pineapple and ripe melon, grapes and red berries, an underpinning of pine. The brewers used a kveik yeast strain for added citrus, while light caramel malts boost the juiciness of the hops further.

It sits at the sweeter end of the normal IPA spectrum (excluding the world of NEIPAs and hazy DIPAs, TIPAs and oat cream / milkshake offerings, of course), while low perceived bitterness makes for a beer as easy-drinking as a modern pale ale and, at just 5.5 percent ABV, not much stronger than one either, making it a by-the-pint candidate when the city opens up again.