Beer Wolf of the Willows Disco Of The Dead 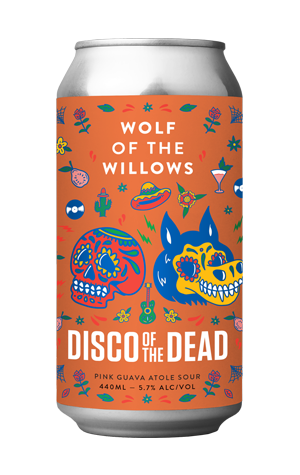 Looks like it's disco season in the Melbourne craft beer scene (you'll see what we're on about next month...) as Wolf of the Willows return to territory they've had fun in before: taking inspiration from the cocktail world when creating a new sour. We're told Disco Of The Dead celebrates Mexican bar El Gallo Altanero in Guadalajara and Tequila Tromba, and has been created remotely with bartender Alejandra De Aguinaga. They've gone for a "Pink Guava Atole Sour", which has seen them use corn maize as part of the grain bill and then guava purée, Madagascan vanilla and cinnamon during fermentation. All that's alongside souring lactobacillus, Aussie hops and "an abundance of oats and wheat" for body and haze.

If that all sounds like a mouthful, don't worry: the disparate parts have been combined judiciously. It pours a colour not far off that of the can and smells delightful – guava dominates but as part of a tropical mix involving soft, sweet berries and stone fruit too. Texturally, it's a case of spritz rather than sour or bracing, which contrasts with a faintly syrupy sweetness while remaining delicate for a near 6 percent ABV beer.

You could sit and try to analyse the various elements, but such is the balance with which Scott McKinnon has brought things together you're better off just enjoying what I reckon is one of his best beers to date. You could easily inhale these on a hot afternoon. And be merrily asleep on your picnic blanket long before sundown...

They've also put together Day of the Dead Party Packs and you can access a Disco de los muertos Spotify playlist from the Mexican bar to help get the party started.

Melbourne-based Crafty Cabal members can try to get their hands on one of the packs by entering a ballot before 5pm on Monday, October 26, too.