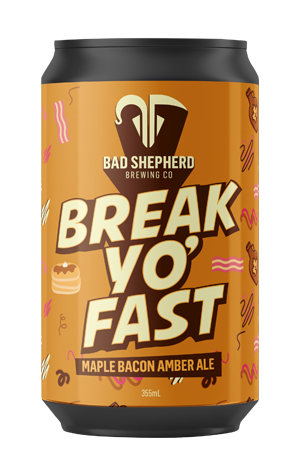 Did Bad Shepherd co-owner Dereck Hales pull some strings behind the scenes ahead of their fifth birthday party? Or has he instilled such loyalty among the brewery's fans they're only too eager to get behind his country of origin? Either way, when it came to voting for the beer to celebrate the Cheltenham operation's fifth birthday, the winner plucked from their back catalogue was Break Yo' Fast, a maple bacon amber ale with roots in North American breakfasts.

The reboot certainly nails the colour; more importantly, it takes me back – vividly – to indulgent past brekkies: a stack of drenched pancakes in a New York deli on a family trip as a 12-year-old; another with the crispiest of bacon strips in the Hollywood Hills the morning I proposed to Mrs Pint. That unmistakable maple syrup aroma drizzles it’s way up your olfactory system, with the smokiness representing the bacon taking a supporting role, although more prominent to taste and adding a dryness – or at least attempting to amid the sweetfest – at the end. A party beer indeed.