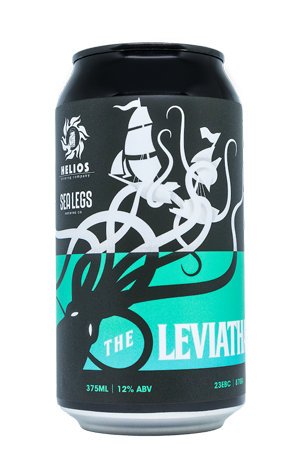 Who dares open the doors of its mouth,
ringed about with fearsome teeth? …
Smoke pours from its nostrils
as from a boiling pot over burning reeds.
Its breath sets coals ablaze,
and flames dart from its mouth…
When it rises up, the mighty are terrified;
they retreat before its thrashing…
Nothing on earth is its equal—
a creature without fear.

The ancient Hebrews were afraid of the chaotic unpredictability of the ocean, and so developed terrifying descriptions of the great creatures of the deep. Of course, it’s all very poetic – no one’s suggesting they’ve seen a fire-breathing creature like this. Until now.

The Helios team invited their friends from Sea Legs to join them in brewing this mysterious monster of a beer. Is it a strong ale? Is it a IIIPA? Is it a quadrupel? Stop trying to label it; you won’t get far.

Just notice the deep orange of coals set ablaze. The brandy-soaked apricot and peach syrup flowing through its veins. The impenetrable hide of American hops – Centennial, Chinook, Mosiac and Idaho 7 – studded with pine needles and shards of citrus toffee. The yeast esters rising from the depths, revealing flickers of candied banana seen in silhouette. Its rasping breath, boozy and ready to ignite, but rounded and warm as it lays in wait.

Will you retreat before the thrashing of the Leviathan? Or do you dare open the doors of its mouth?

It will be part of their third birthday